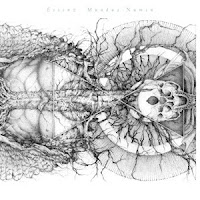 Essenz is a band which takes its hybrid of sub-genres seriously, ever seeking to balance off its bolder black metal elements against lurching doom sequences to the point where the album seems split about 50/50 between the two mediums. There is of course some integration of the pair, with the harsher rasped vocals being leveled out over the slower, grooving riffs, but ultimately I found myself leaning towards the doom half, since the riffs seem slightly fresher and more memorable than the blast beat rhythms which batter along in relatively predictable patterns. That's not to say that the album excels in either field, but it's at least an interesting fusion which the Germans have supplied with a massive, crushing production suitable for much immersion.

I have to admit that, surprisingly, my favorite track on this record was the instrumental "Observing Spectres - Schizophrenia", a disjointed noise track with clean guitars and titillating ambiance bisected with huge swells of distorted bass, rickety guitar effects and all manner of confusing chaos. This is the conceptual 'sequel' to slow, Sabbath groove of "Observed by Spectres - Paranoia" which provided a pretty great example of the band's overall duplicity. It opens with concrete grooves and then transforms into this double bass segment with driving, simplistic chords that churn repeatedly to create an atmosphere. Unfortunately, as with several other places on the album, once the band explores the blacker side of the coin, the riffs end up quite dull and uninspired, with rhythmic patterns and note selections that seem rather effortless. This is especially noticeable on a track like "Sea of Light - Plemora", where the fast riffing is used to set up a decent, punk/black rhythm. Granted, the tones on this album are so huge that the music still manages to beat in your eardrums.

The drums and bass are lockstep consistent and pulverizing, but with so few interesting guitar progressions to support, it all feels rather underwhelming outside of the production. The rasped and guttural vocals are also pretty average, and though the band weave in brief samples and other effects to create a more surreal, multi- dimensional feeling of atmosphere through the album, it never quite comes together for me. Also, with songs here that are often 10 or more minutes, I didn't feel that there was quite enough variation and riffing to keep my attention fixed for their entirety. Essenz does the slower, dense and droning death/doom well enough (as in "To the Bone - Mania"), and naturally their cohabitation of extreme styles creates an inherent level of dynamic tension throughout Mundus Numen. The album's loud and concussive mix will likely prove the envy of many other artists pursuing such vaunted levels of heaviness. However, while the band's lyrical themes and artwork provide a compelling sense of creativity (I also love their logo), I never felt satisfied in listening to this. The better riffs are too often offset by their less interesting counterparts, and though it's not a bad album for those seeking blackened doom done differently, I was left wanting in the end.