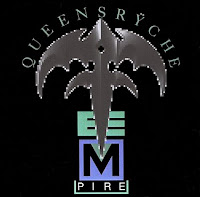 I'm not sure whether Queensrÿche's members were caving into the pressure that their own mounting success might have constructed, or if outside forces like their record label and management team asserted themselves a bit strongly on the group's decision going forward from Operation: Mindcrime; but Empire, the fourth full-length, was the first of their albums which didn't feel as if it were a step forward. Rather, this was some horizontal maneuver into a more friendly and secure realm of radio-targeted hard rock, and I can recall an immediate disappointment, as I was hoping they would take the level of ambition wrought for their 1988 magnum opus into an even more magnified, complex direction which elevated their musical chops and perhaps even retro-evolved with some more aggressive content redolent of their earlier records, fused to the glorious songwriting and chorus strength of Mindcrime.

That's not to imply that Empire is the worst note in the strident and disheveled legacy band has built unto the 21st century, but it's a clear downturn from its impressive predecessor, and even at best, it seems like it was attuned to same the Gold and Platinum defining hard rock audience obsessed with Def Leppard, Bon Jovi, the Scorpions, and other arena-packing leviathans of the late 80s, more so than the prog nerds who enjoyed the two albums prior, or the leather savages lusting after The Warning Pt. II. Queensrÿche had taken a taste of the bubbly with hits like "Eyes of a Stranger" and "I Don't Believe in Love", and now they wanted a larger slice of the vineyard, which they certainly acquired with this album. I'm not going to lay this all at the feet of the frustratingly catchy sissy-ballad "Silent Lucidity", a song that infested my high school years and the ensuing decade through countless overplay on imagination-lacking video and radio channels, High School proms, and music lessons for aspiring vocalists who were tired of aping "Stairway to Heaven". No, really the whole of Empire is ridden with flimsy rock songs, and it seems to lack the unified themes threaded through the earlier full-lengths, not that I mind Queensrÿche decision to step away from the concept album, I only wish they had made it...well, a little more metal than this. Translation: a lot more.

As soon as "Best I Can" rolled out of my speakers as a teen, I was stranded in some sort of nebulous cross-worlds of Rush and Van Halen, the one distinguished difference being Tate's familiar cries. I've got no problem with those bands at their prime, but compared to the emotional and inspired gauntlet the 'ryche had run me through just a couple years prior, this seems like vapid audio vaporware, posi-cock-rock wearing a great big happy face. There are still some muscles to DeGarmo and Wilton's guitars, this isn't a complete 180 from Mindcrime in terms of tone and style, but until at least the bridge vocals and their pulsing undertow, there isn't much of interest to this song, no dramatic and mind spiking chorus despite the crystalline, clean delivery of the vocals and guitar melodies. More successful is "Another Rainy Night (Without You)", with its woozy, driving chorus, bumping Eddie Jackson bass-lines and strong note progressions; and the title track "Empire" itself which is the heaviest song on this album with its gang, race and corruption related lyrics and an exquisite chorus harmony that has Tate stretching his pipes to appreciable ends; but even the latter is goofed up a little with the lower pitched speaking the man disperses through the more majestic moments.

Otherwise, there aren't many tunes in place here that stir any response from me whatsoever, which was a real shock considering what an earection (apologies in advance) I sport for its predecessor. "Della Brown" is wimpy overpolished cubicle rock. "Anybody Listening?" is like a weaker back-up power ballad for the more fetching "Silent Lucidity", with a ballsier, electrified chord chorus; and other tunes like "Hand on Heart", "One and Only" and "The Thin Line" were entirely forgettable. "Jet City Woman" and "Resistance" had a few classy components, but they're just not strong enough to singe themselves deep into my conscience. This was a hot, hot record upon its release, and I couldn't escape it through anything less than a complete suspension from my teenage academics, but so much of it seemed watered down for mass consumption, and frankly it's become their most dated sounding record, even moreso than the synthy, divisive sophomore Rage for Order. Clearly there was some strong composition still coursing through the band's veins. You don't come up with something so sugary sweet and catchy as the clean guitars or orchestration for "...Lucidity"  by sleeping on the job...

...but unlike Operation: Mindcrime, on which I never felt a single note was out of place or less effective than the next, this material seems inconsistent in its ability to stick. The production is spiffy, clean and safe for the whole family, with a lot of glimmer to the clean notes dancing alongside Tate's melodies, but the rhythm guitars never pack that much of a punch, even in "Empire". Rockenfield is still hitting hard, but he just sounds so clean on this album that you could have almost replaced him with a primitive drum machine and gotten a comparable result. Guitar melodies are strong, as in "Another Rainy Night" or the intro to "Resistance", yet there aren't enough of them that burrow themselves inside my cranial meat and lay their parasitic progeny. Hell, even the cover art seems bland this time, the band's icon against a black backdrop with yet another indecisive 'logo' and some chic, corporate block-text that would have been better served in Janet Jackson's Rhythm Nation. Granted, Empire wasn't the first Queensrÿche album to flirt with a then-modern, sleek safe for work rock sensibility, but Rage for Order was far stranger, with better lyrics, more compelling subject matter and quirkier choices of instrumentation; it had a looser, more experimental appeal than this.

Empire doesn't suck. It's got a few strong songs, and the music and lyrics do exhibit a modicum of effort, but this was clearly the first symptom of the Washingtonians' slide into creative poverty that would define the next few decades of their continued careers. There are about 15-20 minutes here which I'd consider to approach par with the earlier Queensrÿche. The remainder is a mild and mediocre kowtow to the grazing masses while they waited for the next Hall & Oates record. Letdown central. Naturally, it's gone triple platinum (at least) and is their most financially successful venture.