Tempestuous Fall - The Stars Would Not Awake You (2012) 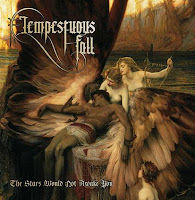 Based solely upon my immersion into and enjoyment of his other projects, Dis Pater's Tempestuous Fall seems on the surface an intriguing idea, the Australian multi-instrumentalist stepping outside his comfort zone of high concept, atmospheric black metal into the comparative extremity of the doom/death niche. The Stars Would Not Awake You sacrifices none of the spacious overtures of his other recordings, but what ultimately manifests here is more like an admixture of drudging, raw funereal guitar tone, slugging chugging sequences and glazed melodies paired up with both growls and My Dying Bride-like clean vocals, furnished with bright and airy synthesizers redolent of Midnight Odyssey. It's probably my least favorite of Dis Pater's releases to date, but I'd be lying to say he doesn't approach it with the same cohesion and tenacity he does his other entities, and it's not a matter of the man overextending himself.

Each of the five tracks falls between 10-15 minutes in length, taking its sweet time to envelop the audience in drifting sadness, some of them more successful and striking than others. The guitars alternate between thick, low end palm muted sequences of little interest (like in "Old & Grey") to more graceful, tear stained progressions that function in sync with the other instrumentation. Those who fancied the somber variation and sheer immensity of Funerals from the Astral Sphere will probably be right at home with a track like "Marble Tears" or "Beneath a Stone Grave", the latter proving one of the best compositions here with its cleaner, dreary and haunted intro guitars, but Dis Pater divides the content up quite evenly between the crushing series of chords, sailing synthesized choirs and moments of introspection to balance out the burden of the heavier depression. Drum beats are kept minimal, as they so often are within this sub-genre, and there are spaces where they cease entirely. The bass is often muddied and overpowering through its distortion, and the production never so polished that it fails to permeate the listener's soul. Dis Pater's clean vocals are quite refined here, perhaps even more confident than on the last Midnight Odyssey record.

The Stars Would Not Awake You is mildly brighter and warmer than funeral doom forebears like Skepticism and Thergothon, so don't expect a lot of droning dryness many seek in this field, though their influence is clearly felt in the album's drawn out eaves of decay. It's also not nearly so psychedelic or staggering as something like Esoteric. This is more within the realm of a band like Shape of Despair, Evoken or Mournful Congregation, and fans of such are like to get the most out of this particular record. I admire that Tempestuous Fall brings a little personality to the style, and found that the songs weren't as dull or monotonous as they often are within these parameters, but I simply didn't find myself as engrossed in the songs as I have been with Midnight Odyssey or The Crevices Below. The rhythm guitars often felt banal, predictable and uninspired, and few of the vocal hooks stuck with me, especially the growled parts. In the end, it didn't wrench at my emotions as much his other projects; I never felt that same level of sweltering wonder. That said, it's not at all a bad record, and those who have a high threshold for slow suffering should at least give it a pass.