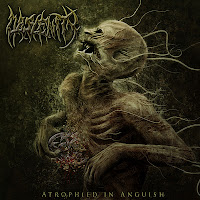 I've got fond memories of picking up a few Obscenity records through the mid 90s, like Perversion Mankind and The 3rd Chapter. But, despite their position as one of the earliest of Germany's pure death exports, alongside groups like Atrocity, Lemming Project, Jumpin' Jesus, and Fleshcrawl, I wouldn't say they ever stood out to me as one of the more distinct artists in the field, and thus I took little interest in their turn of the century records releases such as Intense or Cold Blooded Murder. With Atrophied in Anguish, the band's 8th full-length overall and their first in six years, they prove yet again that they are one of the most 'total package' bands in their scene, implementing a number of techniques both brutal and old school to polish off an admittedly well rounded, riff-focused record that should prove worthwhile for purists of the medium.

To best describe their sound here, imagine a collision between Florida titans Deicide, Malevolent Creation and Morbid Angel with Dutch ancestry Sinister and Pestilence. The Germans adopt the typical pummeling and blasting traits when necessary, with loads of double bass, octave chords, faster death/thrash or melodic riffing sequences, and a nice balance between chugging breakdowns and outbreaks of unbridled velocity. There are a handful of newer members in the lineup this time up, including vocalist Jeff Rudes who has an efficient, if standard, ghastly growl that once again reminds me of the master Martin van Drunen, with a little of Corpsegrinder's low end timbre, though when they layer together the grunts and snarls they also evoke clear similarities to Glen Benton of Deicide. Nothing unusual or unexpected, to be sure, but I'll say that the guy's percussive patterns are a perfect mix for the battering, surgical semi-technicality of a track like "Swine to the Slaughter" or "Neurotic Frenzy", two of my favorites on the record. The storm-work of drummer Sascha Knust (who was with the band for their first decade and rejoined last year) is undeniable, and the leads are well developed (once again I'd point out "Neurotic Frenzy").

Most importantly, Atrophied in Anguish is a veritable riff-fest. Even if a lot of the note progressions sound samey to anyone schooled in the genre for the past two decades (or more), they still fire off a lot of nice muted picking sequences, and the constant variation between heavier grooves and brief tremolo patterns keeps the listener engaged. The production here is vocal and axe heavy, so you can really feel out every chop, but you can still discern the breadth of the bass and the acrobatic drumming alongside the thicker punch of the guitars. Though I earlier picked out a handful of the more frenetic and clinical/tech sounding tunes as particular highlights, the pacing and writing is actually quite consistent throughout, and ultimately, Obscenity have a record here which might well appeal to a large cross-section of the death metal populace, be they the brutal followers of Cannibal Corpse, Suffocation and Severe Torture, early Floridians or those into the more intense scene out of California in recent years. Atrophied in Anguish is perhaps the band's most accomplished and formidable record to date, and I, for one, am pleased to see they're still chasing and clobbering that dream.