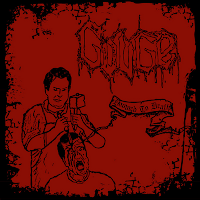 Norwegians Gouge are on a roll lately, not only getting a deal to issue their debut 7" through Hell's Headbangers, the perfect home for it, but also a recent 'Band of the Week' recognition from the esteemed Fenriz of Darkthrone. That right there tells you that you're in for some ghastly, unflinching old school emissions, a hint enforced by the cheesy cover art and the track listing, which reads like a paraphrasing of old Repulsion, Autopsy or Death song titles. Visceral kitsch aside though, Gouge does not disappoint, conflating pre-90s death and thrash ingredients into one unwholesome, wretched and satisfying blend of severed limbs and an unabated disregard for technicality or innovation of any sort, which for some will provide the ultimate stamp of authenticity.

If Doomed to Death were just another stroll down memory lane, with nothing to speak for itself, then I'd write it off to mere, empty, nostalgia, but fortunately this duo have invested enough fiery energy into their riffing sequences to succeed where many others fall short. This is essentially a primal and uncompromising tribute to records like Horrified, Scream Bloody Gore and Severed Survival, with a few nods also to Slayer's Haunting the Chapel EP in terms of simplistic note structures that writhe their way into the listener's ears like irradiated serpents. They also break into some pure, mid paced thrash riffs, often to support the wailing, sporadic leads, but the note progressions in these are not quite as interesting as the more accelerated phrases written for tracks like "Ritual of Gore" and "Nuclear Vomit". The drums are tinny and harried, shifting back and forth from straight punk beats to controlled blasts, and the distorted bass serves to add breadth to the guitar lines more than to stake out its own identity. The guitar tone is redolent of ancient speed metal, perhaps a bit of Chuck's sound on Scream Bloody Gore with the older Razor records, while the vocals eschew the Scott Carlson sneer for more of an ominous, Reifert gargling of gory gibbets.

For a band so new (the members also play in another group called Condor with a blackened edge), this is definitely consistent and entertaining, even if it strives for little more than having a good time their obvious inspirations. It's about as 'fresh' as the Cold War, but if, like myself, you grew up in that age where extreme metal was beginning to take roots, you've got no choice but to have fun with this. It wouldn't hurt to work up the thrash metal sections with more interesting riffs, but otherwise Doomed to Death is a 9 minute burst of frenetic excreta that should appeal to splatter-punks, death-grinders, denim-and-patch-thrashers and old school lobotomists the scene over. Looking forward to a full-length of comparable quality.