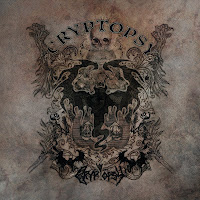 My connection to Canadian juggernauts Crytopsy has remained tenuous at best through the years, peaking with the influential None So Vile and its successor Whisper Supremacy, which are in my opinion the high points of the band with their respective vocalists Lord Worm and Mike DiSalvo. Having already been underwhelmed numerous times by their intermittent recordings like Once Was Not, I simply didn't feel that same level of crushing disappointment with The Unspoken King as others have so ardently expressed, since I had so few expectations to begin with. The album sucked, sure, but I couldn't have cared less. Apparently the band wanted a piece of the emerging deathcore pie, and in doing so, drove a wedge between themselves and their fan base, not picking up the 'fresh' audience they had no doubt banked on.

So now we've got the presumed 180 degree turn back to the group's ubiquitous brutality, which has rubbed off on more bands that you could shake a gore-drizzled spine at. That bold, eponymous, mid-career defining album we've experienced so many times before, which will set out to right all the wrongs. Directly from the start, this doesn't look good. I mean that literally. Cryptopsy LOOKs like shit, its cover a pastiche of the band's bat-like icon over some generic emblem which you'd expect to find tattooed on some hardcore fan, or an Ed Hardy shirt design. Yeah, they've got the original logo seated at the base of the design, but why? It's a great one, and like the earlier albums, it should be a feature, not a visual footnote. It's almost as if the band was trying to bridge both its long-time, old school audience with the indifferent 'core audience The Unspoken King had reached out towards, and frankly it's a bummer. Fortunate, then, that as soon as the windy ambiance which inaugurates "Two-Pound Torch" parts, the Canadians roll us over like a calamitous cavalry charge borne out of the motherfucking Inferno.

Harried blasting, double bass rolls faster than you'd drop your trousers at a medical exam with Megan Fox, brute grunts that at last imply Matt McGachy is the right man for the job, chugging, squealing, and spurious, acrobatic guitar patterns that zip and zag across the brutal landfill of rhythmic concussion: I'd say Cryptopsy has awoken from any and all perceived delusions of its direction. And yet, there are certainly spikes of melodic death metal screaming through the maddening mesh that hint the band haven't yet abandoned the notion of feeling out parallel sub-genres. Dense, post-death grooves permeate the accelerated bursts and old school tremolo riffs throughout the album, and there's a jarring precision to the band's alternating tempos which shows a lot of elbow grease went into the album's composition. The bass pops along with such a fervor that it often impersonates some brutal funk. There are points at which Flo Mounier's battery is so lockstep conjugal with the patterns of Christian Donaldson and (the returning) Jon Levasseur that the sheer force of their combined delivery feels like a hundred Lilliputian hammers cracking my cranium simultaneously.

Tracks like "Amputated Enigma" and "Damned Draft Dodgers" trade off impious mechanical grooves with unbridled, cathartic velocity, while others like "Red-Skinned Scapegoat" embellish the carnage with radioactive leads and atmospheres. Plenty of pummeling variation throughout its compact, 31 minute run time, and while some might still accuse this or that riff of sounding 'deathcore', who really gives a shit? The subcultural streams are so crossed these days that they're all bleeding into one another, but for what it's worth, few of the grooves felt cheap, predictable or pedestrian (except maybe the close of "Ominous"). Most were intense and well managed against the extreme gees of the band's typical celerity, and fit like a glove to the record's huge, polished and punishing production. It's a modern tech-death explosion, with a contemporary gloss to its mix, but you can hear everything equally and that's all I can really ask for.

All those compliments aside, I can't confide to having loved the album. It's engaging, pissed off, and its hyperactivity is certainly conducive to a neck-strain, but few of the songs or riff patterns are distinct or memorable for more than a short time. As an exercise in sheer hostility, its right up there alongside most of the band's Cryptopsy has inspired over the past 15 years. You'll rarely wish to sit still here, so intense are the performances of the musicians and mechanistic their sadism, but despite this a lot of the rhythm guitar patterns and fluttering arpeggios do feel like a mere run through the motions of the niche they helped birth. I doubt I'll think back on this in six months' time. For now, it's fast. Fun. Furious. A partial update to None So Vile, if not an upgrade. Apology accepted.