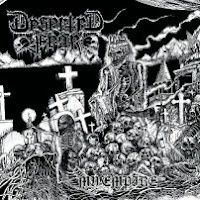 My Empire had me at 'hello', or rather the frightening, effective and simple swell of ambiance, low timpani and horns that set up "The Battalion of Insanities". I admit that when I first looked at the album, I felt as if I was in for yet another treatment in the tireless yet exhausted crusade of classic Swedish death worshipers. There is a hint of that, sure, but I was happy to hear that Deserted Fear had more of a Bolt Thrower angle to their style than I was expecting, if it was tempered in the more modern and potent sounds of bands like Hail of Bullets or Amon Amarth who know very well to weave a tight melody through an ample, crushing, headphone-storming tone.

The caveat here is that the Germans also incorporate a very abusive vocal tone that offers more emotional splatter than your average guttural grumbler. It's like Martin van Drunen, John Tardy, Chris Reifert and L-G Petrov thrown into a blender, the resulting viscera spattered all over the riffs; and with guitars this muscular, you really need that distinction to keep the music forceful, primal and aggressive. Drums and bass here are in general just enforcers for the guitar, but they're kept voluminous in the mix so that they're never drowned out, and overall Deserted Fear feels more taut and tempered than a tank. Ballistic and bred for war, this is, and while the actual construction of the riffs throughout My Empire might not feel incredibly original or distinct in this theater of combat, the pacing is very even throughout. The leads are sepulchral, spectral and constantly provide aesthetic elevation to the horde of fist-pumping zombie hymns beneath, and tracks like "The Black Incantation" have these incredible breakdowns that you can feel deep down in your gut. In fact, you should probably listen to this alone, because if another human being is in close proximity, you're likely to perform some unwelcome piledriver or body slam on them that gets you a night in a cell and a court date.

Fans of modern Asphyx, Hail of Bullets, or Fleshcrawl, or The IVth Crusade should be first in line for this record, because it maintains that same marriage of blustering studio clarity and ceaseless, pulverizing aggression that those bands honor; but it will also hold a lot of appeal for those into Swedish veterans Dismember, Grave and Unleashed. Topically, the lyrics don't seem all that interesting or unique, and the black/white cover art and logo feel typical, but My Empire is just one of those albums that succeeds on its volume and sincerity. Nothing reinvents the wheel, but where the riff structures often suffer from that sameness we all experience when deeply invested in decades of a musical genre, the Germans know how to create a journey that at least keeps the listener engaged throughout. Certainly huge sounding for a debut.