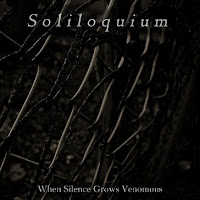 Soliloquium (try saying that with your mouth full) is the latest project of two gentlemen who hail from a pair of other underground Swedish acts I've covered: Desolator and Ending Quest, both of which are cast in a more decidedly death metal mold. When Silence Grows Venomous is their first stab at an atmospheric death/doom aesthetic, and the duo has been offering it for free over at their Bandcamp. Judging by what I've heard in these two tracks, I'd have to say the demo is worth checking out, for while it doesn't exactly bring anything new to the table, it exhibits a strong knowledge of the niche's fundamentals, and a firm awareness of the suffering with which it seeks to burden its audience.

Clearly you've got the trace elements of early Anathema or My Dying Bride here, circa the spacious and mourning guitar drudge and broad, guttural vocal inflection, and the lack of apprehension at incorporating cleaner sequences with both the guitar and vocal. Yet, there's also this constant surge of melody being expanded above the simpler chord set, which reminded me of fellow Swedish monoliths October Tide and Isole, and really helping to keep the listener invested in what might otherwise prove a slog. Both of the two tracks clock in at 7-8 minutes, with neither becoming boring whatsoever. There isn't a lot to the lethargic drums here apart from the occasional fill or double bass, but the guitars are so omnipresent that I felt like I didn't need much more than that, and I must compliment the vocals, which definitely take a broader spin on the Dan Swano style. The cleaner timbre used for the end of "Garden of Truculence" isn't exactly distinct, nor evocative of much range, but then, the solemn and slightly monotonous pitch is suitable to the gloom of the guitars.

They'll also pick up the pace from time to time, with bolder, rock-out rhythms redolent of Tiamat, Lake of Tears or Cemetery, and when the growl erupts over a sequence like this, the band takes you away to that obscure paradise available only in Swedish doom. Rhythm guitar riffs are hardly inventive or unique, but to a long time fan of records like Clouds, Black Vanity, Headstones or Rain Without End, this familiarity won't prove much of an obstacle. The bass-lines don't exactly thrill me, they seem content to meander along with the guitar for the most part, but the tone is affluent and adds a little depth. In terms of production, I do feel like the drums could benefit from a boost to their volume, and I would say the same for the melodies, but otherwise this is clear and present for a free demo recording, and with a little more time and energy the rest could easily be fixed. Ultimately, When Silence Grows Venomous is one of the stronger works I've heard from these two, and it delivers exactly what it promises, a slew of saddening dynamics that shall wrench despair from the Autumn air.