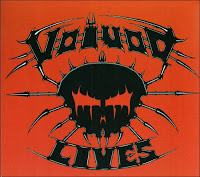 With the exception of the Eric Forrest years, Voivod is perhaps one of my overall favorite bands to have ever picked up musical instruments and given the career a go. This is in part because I am a massive nerd whose tastes run between science/speculative fiction and metal music, of course, but also because they are just that distinct. That important. That unforgettable. Being the case, I waited patiently for about 15 years until I could finally buy an official live album. There were bootlegs and clips out there, some of which I purchased, but I never found them satisfactory, and having witnessed the band several times on stage even by 2000, I really wanted to translate the experience into my car, or on my home stereo. Not that the studio efforts didn't offer enough value on their own...fuck, they're so creative and fascinating they'd last me dozens of lifespans, but the point remains. I wanted a live album.

So it's admittedly bittersweet that, when this finally happened through Metal Blade, it was during the 'trio' years, with E-Force handling bass and vocals. Don't get me wrong, I found Forrest to be a talented enough individual, who did a decent job of growing into his role with the band, having to replace not one, but two core members that were around during the Canadians' unstoppable hot streak in the 80s. I'll go more into depth on this situation when I'm covering the studio records he was involved with, but needless to say my tenuous interest in his phase of the band's career rubs off on my feelings of Voivod Lives, as I find it to be the single worst Voivod live offering of the three I own, patched together from two performances in New York and Holland. I attribute much of my disdain for these recordings to the selection of material, much of which is taken from the mediocre Negatron album, and also the fact that the crushing, dumbed down, simpler style of songs they were writing for this period simply did not translate very well to the live setting.

Of the 11 tracks on this live, six hail from Negatron, another is a Venom cover, and the remaining four are strewn about the rest of the band's classics. Pieces like "Nanoman" and "Project X", while maintaining Piggy's patented, dissonant and alien feel to the guitar tone, are simply too much like the band wanted to revert to the most basic of thrash, without all that punk energy of their formative years. There are a handful of decent riffs throughout this material, to be fair, but the mix here is really rough, with Eric's voice sounding like he's entirely one-note, the harsh, gravely tone; the bass drum sounds like crap, and the guitars are a bit too clunky and distorted sounding to make a difference. Where I constantly turn to this band for their brilliant sense of variety and exploration, much of the playlist on Lives flows together in a clunky manner that does nothing to build any anticipation. Even the songs I WANT to hear, like "Tribal Convictions" and "Voivod" itself, don't leave much of an impression, with the possible exception of the trippy bridge to "Nuclear War".

It's like ordering a feast, only to receive scraps because they ran out of meat. Forrest had only been in the band for a few years, granted, so I can somewhat forgive them for not loading up the set with the more progressive material from Nothingface or Angel Rat (none of which exists here unless you have the digipack with "The Prow"). But this doesn't excuse the questionable audio quality, the lack of real balance across instruments, and having to suffer through a lackluster song selection in general, and Voivod Lives was unfortunately nowhere NEAR worth the wait. Avoid this unless you like spending money on things that make you sad.