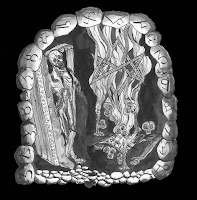 One of the true highlights in this hobby of mine is to experience the positive growth of younger, underground acts as they develop into more mature, seasoned sounds; and Severing Soul from Flesh is the latest instance of this I've come across. I had a neutral reaction to the 2011 promo Dire Omen had sent me, but they've upped their ante this time around, with a considerably stronger sense of identity. Everything from the Tim Grieco (Antediluvian) artwork, to the punchier production, to the very atmospheric spin they place on centrally old school death metal motifs is advanced. I can't promise that the Canadians' new EP is wholly unique or consistent to the point where it's ready to march into the upper echelon of its newfound niche, but it's certainly a step up in the ranks.

The core strength I noticed in this set of songs (only one of which has been drafted from the previous promo) is their ability to balance out the simplest of old school death metal grooves with atonal tremolo passages or spikes of dissonant melody that immediately capture the ear with creepy precision. This is prevalent upon a piece like "Severing Soul from Flesh" itself, which alternates between airy, ominous simplicity to sequences of choppy, thrusting rhythms anchored by the drummer's double-bass footwork. To an extent, the EP services that same set of influences that most of the band's I've dubbed 'cavern core' seem to honor. You'll hear tufts of Autopsy, Obituary, Gorguts, and Incantation floating about the nihilistic nothingness, but I also heard traces of Bolt Thrower, old Sepultura (before they sucked) grooves, the slower works of Morbid Angel circa Blessed Are the Sick, even more recent acts like Sonne Adam or Nader Sadek. None of this is managed with any jumbled technicality or complexity, but dowsed in a pungent, wet guitar tone that sounds simply beautiful when the band picks up its pace for "Decaying Moral Scripture" or the title cut, like human organs being spun on a potter's wheel.

Add to this the ritualistic, unfeeling, languorous haze of the EP's opaque production, and you get this inky wall of impermeable darkness hovering just over your shoulder. Like the best atmospheric death metal, Dire Omen scares the shit out of you. There's a sense of 'wrongness' here, something so eerie and effective about what they conjure here that was almost entirely missing from the last release. I'm not just referring to the angry, aggressive Thelema chanting of the "Presence of Ra-Hoor-Khuit" intro, but the actual metal music throughout. I wouldn't want to run into these guys in some tomb or cellar after midnight, not unless I was armed and armored with holy water, crucifix, and plate mail to defend me against the sacrificial knives.  Partnered with the richness of the mix, gruffness of the occult guttural vocals and the overall pacing, this is something I'd easily recommend to those seeking new voices from the abyss, even if it's not entirely perfected or distinguishable from several of the other names I've dropped above. Well done.