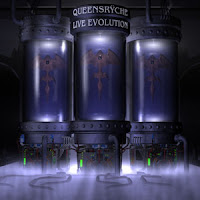 Like the others I've covered, Queensrÿche's Live Evolution was released in both pure audio and audiovisual formats. However, unlike Operation: Livecrime or Mindcrime at the Moore, the set list here was accumulated over two nights and ran the gamut of the band's material to that date, with a strong selection from their earlier records like The Warning and Rage for Order. It does seem a little redundant to her a half dozen Mindcrime tracks on this, since Operation: Livecrime scratched that itch enough for a possible lifetime, but I wouldn't say that their presence fails to contribute to the overall experience, and I rather like how the material is almost presented chronologically across the two discs, showcasing the band's 'evolution' implicit in the title.

However, of the three live albums I've experienced from Geoff Tate and his...alma mater (hopefully not forever), I think certain elements of the performance here are the sloppiest and least pleasing among them. The guitars are strong and workmanlike here, and Rockenfield is caught hammering away on par with the other records, but I felt like the vocals and backing vocals in tunes like "Walk in the Shadows" simply weren't at their apex of quality. Tate manages the harmonies wonderfully, but seems to squawk or lose a fraction of volume in spots throughout the performance. Also, I had an issue with the strength level of the rhythm guitars in tunes like "Another Rainy Night", which felt drier and wimpier than normal. Once the band breaks into the Operation: Mindcrime medley, they include a lot of the brief vignettes that were used as ligaments to the full-length tracks, and presented here on this double live with all the rest of the albums' material I don't think this choice makes a lot of sense...these have nothing to offer in this context.

Still, it was cool to experience a few of the tunes I enjoyed form the '90-94 period like "I Am I",  even if they're not as great as I'd imagine they could be. This album definitely feels 'grander' than the other live albums, if only due to the level of audience response captured and the more cavernous resonance of the recording; though it was recorded at the Moore Theatre like in Seattle like the later Mindcrime at the Moore, this has an arena feel to it reminding me of a lot of festivals and tours in the later 80s/90s. I haven't actually watched the video version of this one, so I can't offer up anything by way of comparison, but I'd have to say that Live Evolution is skippable unless you're absolutely obsessed at the notion of experiencing early cuts like "Queen of the Reich", "Screaming in Digital" and "The Lady Wore Black". I like most of these tunes in their studio incarnations, but they're not optimum sounding here, and combined with a few of the 90s songs on the second disc, which I could give a shit for, it's just not a fulfilling overall effort, though it does have the far broader range in its set choices.