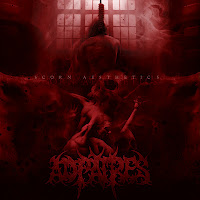 It might not be the most impressive death metal I've heard in recent months, but Ad Patres' full-length debut Scorn Aesthetics is sure to place the French newcomers square on the radar of a wide cross-berth of genre fans due to its level of polish and flexibility. Combining traits of their defunct countrymen Yyrkoon with the thrust of Polish pummelers like Behemoth and Hate, the surgical aptitude of early Pestilence or their Dutch peers Sinister, and a bevy of brutal, old school tremolo picking sequences that careen and collide throughout the album's clinical, pervasive darkness, there's something here that just about any morgue employee can grasp onto, and the performances are razor sharp even if the band's overall sound isn't the most distinct.

The guitar tone used here is very crisp, trading potential muscle for rapid fire penetration and emaciated savagery redolent of the first Pestilence record, Mallevs Maleficavm if it were saturated in the more contemporary riffing structures of, say, the latest Suffocation album. The riffs aren't intensely memorable or original, but they're constantly flying at an accelerated clip and shifting from muted transitions to harried grooves. What's more, the Frenchmen create excellent lead bridge sequences which amplify the mood and atmosphere of each track, the leads dowsed in just enough reverb and effects to chill the listener amidst the more busied but less frightening verses and breakdowns. The drums here are totally on point, the feet just as fast as the hands for the varied blast and double bass sequences, and loads of fills being fired off at available opportunities without cluttering the composition. I didn't pick up a ton of bass guitar in the mix, but if you pay closer attention you can hear that the guy is just as acrobatic as the guitarists, even if his lines don't really veer away from the primary patterns.Vocals are a pretty standard grunt circa Glen Benton, David Vincent and Frank Mullen; nothing outstanding, but dynamic and fast enough to match the musical endeavor.

The mix is also well suited to the writing: you can really pick out the percussive nature of the guitars, which often create a thrashing texture. It was interesting to read that a few of the members have experience with the black metal group Seth, at least the drummer, whose incredible persistence certainly could carry over form that field. Song quality was consistent throughout the 32+ minutes, with a few like "Emphasize Nihility" and "Scars of Compromise" mildly catchier than others, but overall I did feel there was some sameness and redundancy involved, if not for actual patterns of repetition then just similar structures in several of the riffs. They're not the catchiest band, but if you give yourself over to their unapologetic manhandling, you're sure to come away from this impressed. The French have long had a great scene for this style, and while Ad Patres might not feel so 'progressive' as Carcariass or Gorod, or as brutal and brawl-worthy as Benighted, they have delivered here a solid and sadistic introduction to their manic violence.