An Autumn for Crippled Children - Only the Ocean Knows (2012) 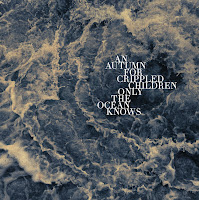 An Autumn for Crippled Children is a Dutch act which has been gradually advancing itself towards the upper echelons of atmospheric, depressive European black metal, showcasing a gorgeous and suicidal disposition that incorporates elements of doom, ambiance and what many are now dubbing 'blackgaze'. Raw guitars, lush and accessible melodies, floodlight bass lines, horrid rasps and even synthesizers collide in enormous overtures of sadness and solitude. They've been releasing one album per year thus far, with Everything (2011) edging forward in overall quality from its predecessor Lost (2010), and now they've made yet another incremental stride with Only the Ocean Knows, the first of their records to truly immerse me, if not for the entire playtime.

It does help that this is front-loaded with one of their best tracks to date, "Past Tense", in which all of the band's agonizing and attractive aural components collide into an effective emotional barrage. The proggy keys used to intro the piece are immediately fetching, and then they just overwhelm you with baleful, fuzz leaden chords that support a set of blistering, glistening melodies that stretch across the overcast, storming seas implied by the title and cover image. While this piece never really 'lets up', there are others through the track list that feature pianos, clean guitars and more sombre structures, creating a fusion of highs and lows that keep the listener from growing tired of any one particular aesthetic. That said, there are certainly some similarities in the riffs being wrought throughout. The tortured, Burzum-like inflection in the vocals seeks to lie just below the apex of the guitar melodies, but you can still sense the pain, as if this were some eerie amalgamation of Filosofem, the post-rock of Mogwai or Explosions in the Sky, and guitar-drenched 90s shoegazer works like My Bloody Valentine, Slowdive or the (oldest) Catherine Wheel albums.

I should state that this is 100% mood music, fit for musing on one's presumed nothingness in contrast to the broader world beyond the self. Seeing that I live a mere 100 yards from the Atlantic Ocean, I found it to provide a worthwhile accompaniment for a sober, evening stroll. It's not party music, so the likelihood of you making a connection during the screaming of your apple sauce-starved offspring, a Superbowl gathering, or in the presence of bass-blasted urban ghetto gangsta neighborhood pollution is about nil. Not all of the riff patterns here are all that innovative or unpredictable, and stylistically it's not a major step above Everything, but the band has really fleshed out its sound here, and the overall flow of the album feels more consistent and compelling than anything they've previously released. I enjoyed this, and in lieu of our collective loss of bands like Lifelover and Apati, this really helps fill a niche, whether your tastes run from ColdWorld, to the sadder recordings of Benighted in Sodom, or to almost any of the more accessible blackgaze acts.