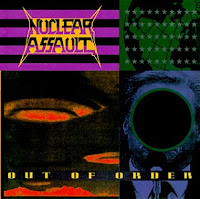 If we were to chart the histories of most 80s thrash giants, whether in the first, financially-sound-to-this-date tier or the plane just below that upon which groups were able to get out there internationally and create a following that put them just out of reach of becoming a 'household name', then we'd no doubt pinpoint a specific breaking point at which each either altered its style dramatically in the new decade, or just plain old started to suck. For New York's Nuclear Assault, it was their fourth album, Out of Order, upon which many lay the blame of shark jumping. Even the title itself seems to imply some sort of dramatic disjunction for the band, though in reality it's a sociopolitical overview like that of the previous full-length.

I'd like to say that this album is in no way the aesthetic failure some seem to claim, but instead a sensible evolution for the band's sound moving forward into the 90s. That's not to say it's a great work, or even a good one. There are a number of flaws throughout that deign it unfit to even share the same restaurant table with the first three, but this is far from a Load or Diabolus in Musica in terms of its 'disappointment factor'. It's simply a case on which the good ideas don't outweigh the uninspired songwriting, the riffing and chorus sequences don't stir up the same frenzy as they did on Survive. Beyond that, this was coming at the tail end of a troublesome period for Nuclear Assault. Their hectic schedule in the later 80s seemed to wear upon the band's focus, and apparently the rewards for their work weren't hitting expected goals (they even seem to make fun of this in the lyrics to "Sign in Blood"). They never quite 'broke through' that Headbanger's Ball barrier to a level commeasurate to the 'Big Four', and really, thrash was starting to fold all around, its prime movers looking towards their own ass-saving (and ultimately lame) mutations in a changing landscape of popular music.

Much of the recording process for Out of Order was placed upon the shoulders of the rhythm section, Glenn Evans and Dan Lilker. Connelly and Bramante were still involved, but in particular the latter seemed to have a reduced role in its conception. As such, the vocals here just aren't anything special. He's still howling at the same pitch, and applying some melody to that natural, raw edge in his voice, but the chorus parts seem never to reach an appropriately memorable climax, and at best they often felt like reiterations of patterns the band had already used on earlier works. It also seems like they put a little extra reverb on the guy, so he does come off a little more separate from the riffing. There are a number of gang shouts and samples that come off mildly dated and corny, but probably the greatest offense is on the Sweet cover "Ballroom Blitz", which is just fucking stupid. As with actress Tia Carrere in the Wayne's World film, they should have just let this one rest, because it adds nothing on the original and sounds like the band are just fucking around (even weaker than their Led Zeppelin cover, in my opinion).

But most of the originals aren't nearly that whack. I noticed a more prevalent use of more clinical thrashing mechanics in several of the songs, almost like they were done clubbing the audience with the baseball bat of their previous albums and instead wanted to see what a scalpel would do. Several of the grooves in opener "Sign in Blood" remind me a lot of the West Coast Excel, for example, while songs like "Quocustodiat" and "Hypocrisy", two of the best here, almost had a Teutonic/Bay Area intensity to them. They also experiment with the vocals a lot more, the other members contributing lower pitched barks and even full lines of lyrics in a more blunt, hardcore timbre. Hell, in "Resurrection" they try their tongues at a few guttural death metal vocal lines, which might seem somewhat of a novelty if there weren't already full death/thrash hybrids starting to put out records around this time.

Conspicuously absent are the little grind clips the band tinkered with in the past. No complaints here, though the band do seem to have shifted their lighter sides to some of the full length tracks, like "Save the Planet" in which they experiment with everything from atmospheric, Spanish speed-picking/classical clean guitars or the jamming prog synth freakout solo near the close. I already mentioned the cover song, which is crappy, but a few of the earlier tunes like "Preaching to the Deaf" with its few lamentably generic riffs, or "Too Young to Die", which unfortunately muddies up a decent guitar progression or two with some of Connelly's worst vocals to its day, and some unnecessary acoustic guitars, leave much to be desired. If they'd cut off about 4-5 of these songs and then refined the rest, Out or Order would have been in far better shape.

Despite its missteps, though, this still felt like a step forward in stylistic direction for the Nukes. Particularly if they had sought a more technical sound altogether, keeping the same vocal style and hardcore undercurrent, like an angrier Crumbsuckers, there could have been something interesting to come out of all this. Instead, at its very best, Out of Order is just another average thrash effort with a few moments of promised intensity that don't really pan out. It's not an awful record, and such reports seem not a little exaggerated, but the fact that they seem to hide the experimentation later in the track list, doesn't reek of confidence. That said, the bass playing is pretty good here (Dan's last album with them for over a decade), and I don't have much of an issue with the production. It seemed like a speed bump that the band could overcome with a little added focus, and its not nearly so creatively bankrupt as their flaccid and pathetic 'comeback' album in 2005.