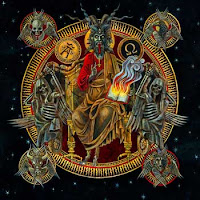 Deiphago of the Philippines provides such an over the top, barbaric blast to the face that it's almost difficult to qualify or quantify what they play as 'music', at least in terms of the traditional aesthetics of melody, harmony and the memorable fortification of rhythmic timekeeping. That's not to say that what they perform is void of any intrinsic, blasphemous value, because a more fucked up ride than this you are not likely to take again anytime soon, and in the tradition of their prior efforts like Filipino Antichrist, they really grind the genre to the hilt, as if they were audio manifestations of living hellfire that sought to seethe and burn through the speakers and headphones into their target audience and melt their damp brains.

I suppose at the root of this repulsive abomination is a hint of incendiary black/war metal redolent of groups like Bestial Warlust, Blasphemy or Revenge, with a fraction of Impiety's noisier 90s friction. I'm also reminded of a local group called Watchmaker, who pursued a similar if more dynamically integrated sense of chaos.The drums are splayed out in blast beat patterns, and the guitars highly distorted. So distorted, in fact, that they feel like they're being twisted through space as they brutishly mete out their discordant clamor. Several sequences are slower, gaping and doom-like, and these feel just as unnatural and fucked as the rest of the riffs, but usually they rifle along at an accelerated pacing. The leads used in tracks like "Exalted Hate" feel like web-works of madness being strewn about the abyssal layer of pummeling and painful momentum, and it's quite easy to become confused and unnerved in the process. The bass is unadulterated, churning sewage, a manhole to an underworld of heinous torture.

Be warned: there is nothing remotely comfortable about this material. Most music is written with the intention that you'll recall and hum along to it later. That's not what an album like Satan Alpha Omega is really about.
Where most extreme metal bands encapsulate their infamy into familiar rhythmic environs, this is extremely, ergonomically unsafe and highly stress inducing. It's like having your spine removed and cast into a giant hamster wheel with ravenous daemons doing laps inside, the nerve endings still attached to the rest of your being. And yet, it's internally consistent. There is a method to this madness. The band doesn't merely fire up a conflagration of random sounds, they leave the chaos to the architecture of the guitars and tease you with the familiar, hoarse rasping of the black metal genre, the solid and spastic drums. It's familiar, and yet so very, very different.

In the end, Satan Alpha Omega is infernal nihilism in the flesh. A tantrum of Leviathan. If I listened to this any more out loud in my apartment, I'd probably get evicted. Primordial, ugly and repulsive, it will rape your ears, then leave bleeding on your doorstop without so much as a goodbye or apology. It's not an album you experience to 'enjoy'...but to 'destroy'. Not in any way 'great', but grating with as much beatific hostility the trio can muster with the 20+ years of history behind it. If this sounds in any way attractive to that misanthropic imp that awaits restlessly within your psyche, seeking to punish you at any given moment, then suffer it well.