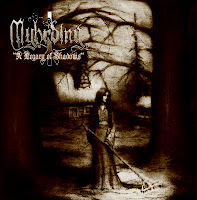 Like their countrymen Istapp, Myhrding are another younger act to enter the realm of melodic-fueled pagan black metal, placing a heavier emphasis on accessible guitar lines and bold, swaggering production than the utter grimness and savagery the genre was founded upon. Clearly you could trace this style back to Swedish national treasures like Dissection, or their Northern neighbors Immortal, with a very wintry undercurrent coursing beneath the flow of notes and harsh Scandinavian rasps, but these guys actually offer up a pretty decent variety of subject matter like vampires and pestilence which you don't ordinarily associate with the niche they perform in. A Legacy of Shadows might not burst anyone's bubble in terms of distinction, but the tunes are performed with enough gallantry that anyone who fancies a melody or a mead horn will find it quite agreeable.

The dual guitars are god here, so you'll spend much of your time following their lines as they scatter and converge through chords and steadily picked tremolo progression. Never insanely fast or slow, they tend towards a moderate pace that allows for some chugging to anchor fine riffs like the perky melody infused into "No Reason to Return" or the saddening decline that heralds "Fight for All Demise". Folksy acoustic guitars are also broken out for tunes like "Blood is the Life" (in the bridge), and they're fairly well matched, often recalling such great tracks as In Flames' "Moonshield" from The Jester Race. The rhythm section is taut and efficient, though I often felt like the bass lines followed the guitars to the point that they became subdued. The vocalist has a pretty monotonous, deep rasp which meets with mixed results here: while the style fits Myhrding's heavy inclination towards the longing, ranging melodies, it doesn't feel like he brings enough variation or emotion to distinguish his presence, and thus he too soon seems buried by the guitar.

Otherwise, A Legacy of Shadows is a functional and oft enjoyable full-length debut, which fans of Swedish melodic black metal will very likely enjoy if they're not exhausted with the form. The lyrics alternate between English and their native tongue, and though I wouldn't say the music itself sinks to the level of evil and horror present in the prose to something like "Blood is the Life", the riffs are still efficaciously poignant and graceful. It wouldn't hurt Myhrding to throw down a little harder, pick up speed for greater contrasts against the more restrained, majestic passages they are so fond of generator. The songwriting here is pretty safe and scripted, with no tendency towards the element of surprise, and while I like the simple leads wound through pieces like "The Inner Voice", they rarely feel anything more than an additional melody, which the album has no shortage of already. Ultimately, though, this is a well pretty well produced and executed affair, it's greatest setback (a common one) is that it's been done before, and more intensely.