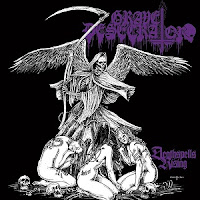 What with the utter worship of all things decrepit, old school and evil in a growing, international crowd of underground pundits, I'm surprised a group like the Brazilians Grave Desecrator haven't taken off further. Their last album, Insult was an effectively grimy and antiquated mesh of black and death metals which drew upon their own national forebears, in additional to the expected influences elsewhere (Bathory, Darkthrone, Hellhammer, so forth). I'm not going to lie: there is not a single new idea present in any of their music, but for what they do, the occult and satanic extremity recalling the late 80s and early 90s, they know how to get the blood rising in the proper appendages, and continue to do so with Deathspells Rising.

This is, however, not a brand new album, but a compilation featuring odds and ends from the band's 13 years of existence to its day. My favorite chunk of this record would be the live set, consisting of six tracks that had yet to be released to the public. They don't all seem to hail from the same performance, but at least the versions of "Revelations (of the Beast)", "Carnal Obsession", "Midnight Sinner", "Cursed Mass", and "Christ's Blood", all from their 2008 full-length debut Sign of Doom, all sound appropriately menacing yet professional. I love this group's raw but clean guitar tone, recalling a bit of that old Hellhammer abrasion, and the dark, blunt callousness of the guttural vocals is a perfect fit with the pump of the rhythm section. There are a few other rehearsal pieces on the album which also come from different periods, but aren't quite as impressive as their official incarnations.

As for studio content, they've got the entire 2001 demo front and foremost, and the sound here was pretty spectacular as well, with raw and ruinous guitars that churn out these voluptuous, hostile tremolo patterns which under the earlier vocals, which were more of a straight, carnal black rasp. A definite boon for collectors who, for geographical or scarcity reasons could not get their mitts on it before (though some of the songs are also on the full-lengths). Rounding it out, Grave Desecrator has incorporated another rarity in their 2003 7" EP Cult of Warfare and Darkness, a brutal rendition of Bathory's "Sacrifice", which hails from a period of the Swedes' career which obviously had an enormous impact on these Brazilians; and there's a new studio cut which also reminds me of something that might have come off the Bathory s/t, mixed with a little Motörhead rock. The production here is a bit deeper than normally, but as far as the style it's one I hope will manifest on the next studio album.

Mileage is going to vary on this thing based upon whether or not you've already experienced the band or if you've got a chubby for the retro black/death aesthetic in general. I do feel it could have been more complete, including the tracks from their Tombs on Fire split and 2010 EP (which had a few cool covers), but the chances are that there were licensing mix ups or they just didn't want to render those recent works irrelevant just yet. If you did enjoy Sign of Doom or Insult, however, or you worship the old school or hybrid sounds you'll find on underground labels like Nuclear War Now!, Hell's Headbangers. Despise the Sun, etc, then dive on in, because the hellish magma's fine. Nothing original, but Grave Desecrator know how to stick a pitchfork into your face.