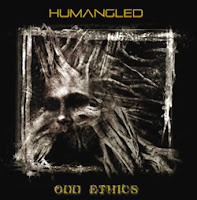 I vaguely remember this Italian group's debut Fractal from just a couple years back, but not enough that it left much of an impression. I will say, though, that Odd Ethics immediately struck me as a more varied and experimental work (like its title implies). Not so much that it entirely evades the bounds of its death metal roots, but enough that each of the four cuts included seems to take on a life of its own. It's almost as if one were to take the grisly old school approach of a US group like Autopsy or Necrophagia, add a touch of Pungent Stench rock n roll groove and then let the whole mess simmer in a slightly introspective sauce that makes it feel somehow progressive despite its obvious, crude impulses.

They wrench this hideous, huge distortion out of their guitars which somehow manages not to ape the huge Swedish tones so prevalent in Euro-death. Never is this more evident than in "Skinned, to Feel All" which operates off these unnerving, weird sludge/doom grooves while the vocals shift between a straightforward , deep guttural and its snarling counterpoint. "Deny Your Creed" opens with a bass-driven flood of almost ambient guitars before quickly devolving into lumbering, meaty and minimalistic death riffing; and the song "Smells Acrid" explores a similar contrast, with busier, churning rhythms. The songs seem to constantly flux between tempos, but all of the individual note progressions are actually quite simplistic, even if the tuning and chords feel slightly off kilter and disturbing.

It's never particularly catchy or evil sounding, but it certainly seems like a band opening new doors for itself to explore a sort of neanderthal hybrid of death 'n' roll which is admittedly rare. There are instances in which the various rhythms clash with one another, or rather the transitions don't seem particularly smooth, but it's interesting that they walk such a path without attempting to inject complexity and progression into the writing. That said, I found myself pretty underwhelmed by the vocals, and the 15 minutes and four songs didn't really offer me a rush of fascination. It's not an immense leap from Fractal, which was more clinical and standard to my recollection, but the stripped down, unusual approach to the riffing, and the almost poetic, ghastly sensibility to the lyrics prove a curiosity to say the least. I can't exactly sing it praises, but it's nice to hear a band work its way outside the box once in awhile. And Humangled does just that: goes out on a limb, then severs that appendage and gnaws upon it.