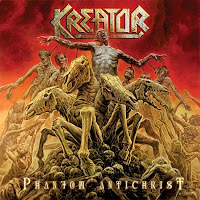 There's little better wed to the sweat-inducing vortex of a preemptive New England summer than a new studio statement from one of your favorite German thrash bands, and Kreator have seen fit to unleash Phantom Antichrist just in time to familiarize a surprisingly stable audience of both new and old for their upcoming tours and festival appearances. Placed on the group's chronological spectrum, I wouldn't say there's much new to this album that one mightn't have heard before in the past 25 years, but credit belongs to Mille Petrozza and his unstoppable armada for maintaining such a huge sense for scale after three decades of exhaustion, and for their ability to produce an album which is intelligent, contemporary and frankly competitive, making most of the youngsters invested in this genre seem pathetic by comparison.

With the exception of earlier records like Endless Pain and Pleasure to Kill, Phantom Antichrist draws upon a broad range of aesthetics from the band's backlog. You'll experience a lot of the emotion and melody that fueled efforts like Violent Revolution or the ill met Endorama. The surgical, manic, meticulous riffing that thrust Extreme Aggression and Coma of Souls into the spotlight. The political, lyrical unrest which saturated the more industrial-charged works Renewal and Outcast. And, perhaps most dominant, the refined production values which lent such a bright, bold punch to their most recent full-lengths Hordes of Chaos and Enemy of God, both of which were excellent in bringing the band back to the relevance that had been lacking since the early 90s. No one of these traits seems to supercede the others here, all are wrought impressively into a well paced and balanced record that shines in nearly every technical spec imaginable, with but a single caveat: this time around, the music doesn't quite stick with me like it has even on the album's direct predecessors.

There are some detailed, impeccable thrash hymns woven throughout the album which certainly catch the ear for a few spins, if not much more than that. "Phantom Antichrist" itself, and the following "Death to the World" were those I felt most drawn too, fiber optic aggressive precision anchored by loaded riffing sequences that reward both speed and variation, built for both moshing and reflection. Mille's vocals are incredibly well mixed to carry his volatile emotions, even when the actual prose seems rather weak or dabbles with the lyrical fixations of ethnic hostility and dystopian collapse that the band have admittedly delved into many times in the past. A few acoustic passages are spread throughout the track list, over which Petrozza manages not to entirely flub up some clean vocals, but I never felt like they added much to the album as a whole, not nearly so effective as, say, "When the Sun Burns Red", though clearly they were trying to reclaim that aesthetic on "United in Hate".

In fact, there seems a great deal of familiarity in the songwriting here, not so much that the band are directly aping themselves, but clearly were trying to reproduce the riffing architecture found in older compositions, to mixed results. Hordes of Chaos was indeed a divisive record, with some loving and others despising its direction, yet I felt like it took more chances than what I'm hearing on Phantom Antichrist; almost as if the band wanted to play it mildly safe and incestuous this time out. The melodies and leads are hardly cheap, all are effective and processed with the due competence of Sami and Mille, but they clearly adopt a more accessible tone with a broader appeal towards fans of Swedish melodeath (in this the album recalls Violent Revolution quite a lot). That said, this delirious balance of controlled bursts of brutality and melodic resonance is also a sign of the band's maturity, and hardly something to be scoffed upon.

Those with a particular, prehistoric hesitation towards anything the band has released post-Pleasure to Kill will remain alienated by the sound of this, and likely anything the band ever records again, but as a gateway for newer listeners, I think Phantom Antichrist will turn quite a few heads due to the high standards in engineering and the group's continued competence. At their heart, Kreator are still writing lyrics that will matter to some in this world, and they still place an enormous emphasis on the construction of their guitar progressions, a quality lacking in so many modern thrash acts. They've got little if anything to prove, after such a staunch and interesting career, and this is a scrupulous, dependable record, if not so stirring as many of their past experiences. About on par with Violent Revolution (with better production).