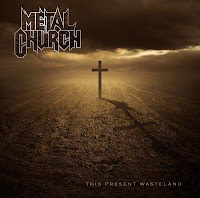 Knowing what I know now, that this would be the final Metal Church album before another dissolution, it's hard not to gaze upon its cover as some sort of memorial service for the once great West Coast band. But beyond that, more than most of those leading up to it, This Present Wasteland is an album which struggles for a distinct identity, and for much of its play length, comes up pretty short. Competent, but even less compelling than the few before it, it's probably the least impressive of the full-lengths involving Ronny Munroe on vocals. Not through any fault of his own, because he's the strongest component of the group here by an order of magnitude, but the album spends about 40 minutes in mediocrity before it finally dishes out a song to remember it by. This Present Wasteland, indeed...

Not nearly so dirty or past-obsessed as A Light in the Dark, you could probably argue that this fits between that and The Weight of the World in tone. Munroe has shifted away from the grimier low range he was exploring on the previous effort, and here he flexes his pipes more along the lines of Weight. There are points on the album where he sounds quite close to Tim Aylmar of Pharaoh, and others where he pursues a wavering, lethal Dickinson inflection, or some pure Rob Halford screams. He tries to make the best out of some highly atmospheric tracks like "Deeds of a Dead Soul" (8 minutes of slow burn heavy metal with some synthesizers and clean guitars) or "The Perfect Crime", which sounded like something off a mid 90s album by Queensrÿche, but despite the well rounded structure of these, they all feel a bit dry in terms of delivering memorable riffs and chorus sequences. Balanced off against the harder drivers like "Meet Your Maker" or "The Company of Sorrow", or the bluesy hard swagger of "Crawling to Extinction", the first half of the album seems like dreadfully average, but well performed and produced heavy metal with a mildly dark angle to it.

The final three tracks are likely the best, with "Mass Hysteria" pumping a straight mix of modern power metal with potent bass grooves and some nice melodies added to what otherwise would be some generic, if busy riffing. "Congregation" kind of enforces the whole funereal feel of this record, but it has some of those Aylmar styled vocal lines which imprint themselves on your mind. However, "Breathe Again" took me entirely by surprise, opening like a bouncy and uplifting NWOBHM anthem and then manifesting some excellent verse guitars that made me think I had taken a wrong turn onto Pharaoh's Be Gone. The vocals here are great, the breakdown which once more reminded me of Queensrÿche or calmer Fates Warning, and though it might seem the friendliest song on the album, it's definitely one I wanted to listen through repeatedly. Unfortunately, the rest of the record just doesn't reach this plateau of success.

As with the other Munroe records, the lyrics are appreciably poignant and effective here, even if the Internet  rant "Monster" seems as exaggerated and ridiculous as these things usually are. 'I am just a screen name and a new profile'. Who the hell really feels that way? It's a tool, not a soul sucking conspiratorial leech. 'We've created a monster, it's taking us down.' Hilarious. Philosophical differences and cliches aside, though, you can tell they put a little effort into the 'script' of the record. The production is crisp and well balanced across all the instruments, without feeling squeaky clean or wholly synthetic. As simple as it is, the cover is one of their most eloquent and eye catching, especially with that familiar shadow being cast by the cross, and I do sort of dig how the title reflects the band's state of being at this time. With Wayne having passed away, and the rest of the classic lineup members spread thin elsewhere in the music spectrum, there is little if any chance that Metal Church will manifest in a configuration which rivals its heyday. This Present Wasteland is far from an impressive finale, but there have been worse swan songs for longstanding acts, so it seems they at least experienced closure with some confidence.