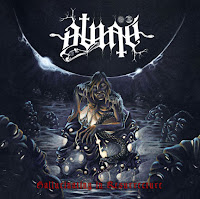 The last thing the world needs right now is another of these cavernous, old school death metal throwbacks, but that doesn't stop Binah from shoving that sentiment straight up my nether region, or excelling at this particular sound. This UK band didn't get the memo. To be fair, Hallucinating in Resurrecture is not nearly so derivative or 'second hand' as one might think: they might use the ominous, growled vocals redolent of Autopsy and Incantation, and some of the muddier and haunted resolution of Finnish pioneers like Demigod, but they apply a particular atmosphere to them that keeps the music creepy throughout. They might also utilize that driven, voluptuous Swedish guitar tone so commonly aped from the early 90s, but they use it more as a broth to season and saturate their ideas rather than a vehicle for riff lifting from Entombed and Dismember.

And ideas they have: from the eerie, saddening pulchritude of the clean guitar instrumental "Into the Psychomanteum" (or the later intro to "Crepuscular Transcendence"), to the fits of melodic tapping and other lead techniques that seem to arrive out of left field ("Eminence...", etc) against the enormous, dominant grinding of the rhythm guitar. Binah, so named from kabbalistic philosophy, implement the dynamic skills of seasoned travelers into the darker wastes of the psyche through dramatic tempo shifting and pure, unadulterated horror. The result is that the listener feels as if he or she is some unfortunate asylum inmate where it turns out that the warden is also an occultist who has just opened the gates to the Abyss, and as payment has offered up the souls of his patients in return for a grotesque immortality. Tracks like "Absorption Into the Unearthly" and "Eminence of the Sombre" will churn your spirit to paste with their manifold blasts and grooves, each sauced in the loud and primitive density of that weighted guitar tone.

Perhaps my favorite single element to this album is the growl, which is incredibly bleak and full and left to resonate over the busier undercurrent of guitars like some subterranean slavemaster traumatizing his flock. It's simply mortifying, even when the riven rhythm sequences and the tactile drums are performing the less interesting of the riffs. In truth, I didn't feel like there were a lot of catchier note progressions outside of the leads. Binah seems to have such an intense focus on production and atmosphere that the songs do tend to fall by the wayside, but then I could say the same for most of the group's peers pursuing this same path. In the end, ironically, it is this very specialization that itself burns Hallucinating in Resurrecture into the bowels of memory. This is hellish, disturbing music which admires its genre fathers from fathoms beneath the earth, enough distance that the vast and tenebrous scope of its production pays off in nightmares. Fans of Sonne Adam, Necrovation, Ignivomous, Disma, Incantation, and of course the Finnish/Swedish revival will likely want to add this album to their wish lists. Just turn off the crush control, and wallow in the fear.