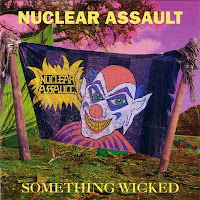 My first recollection of Something Wicked was that John Connelly had joined Megadeth in the 90s, because certain songs here reminded me of Mustaine's writing for tracks like "Symphony of Destruction" off of Countdown to Extinction, or perhaps something from Youthanasia. A painfully simplistic, chugging riff leads into an escalating lattice of melody, primed for easy radio accessibility, and somehow lacking that dystopic nuclear fervor that made me such a fan of their first three albums. As one progresses through this record, the motif seems to hold up, and it feels about as different an experience from Nuclear Assault as John's side project John Connelly Theory which put out an album in 1991. Sure, his vocal inflection binds the groups together, but if not for his presence, and the logo on the awful cover to this record, I wouldn't have even known it was a Nukes release.

Ironically, it's his vocals that prove one of the saving graces for this album, keeping it from plunging fully over the precipice to utter suck. He adds a little more rock and roll spice to his formula, while keeping that raw, urban harshness that defined the earlier works. Almost like an East Coast Chuck Billy, with a few traces of former Whiplash singer Glenn Hansen (in fact, Something Wicked does occasionally remind me of their 1989 LP Insult to Injury). He even pulls off the moodier pieces like "The Forge", with dire, bluesy acoustic guitars, or "No Time", the sorta power ballad in which he pulls off some of his most refined melodies ever. In fact, this album has more clean guitars than any other in their catalog, a sign they were striving for that added mainstream penetration, that late breakthrough they never quite reached in the prior decade. Unfortunately, the brighter points to Something Wicked are counterbalanced by one of the most mundane riffing selections you'd find anywhere: nothing offensive or lacking in variation, but pitifully average at a time when the genre had been largely reduced to just its most ardent supporters, and the dustbin.

I realize there's a more horror spin to the lyrics here, what with the Ray Bradbury inspiration to the title/title track and the Twilight Zone-themed cut "To Serve Man" (both cool topics in my estimation). The Cold War had receded, the street fighting mutant clobbering Damnation Alley aesthetics of the past records probably seemed moot. There were also two new members in the fold: David DiPietro of Jersey might-have-beens TT Quick replaces Bramante, and bassist Scott Metaxas has some huge shoes to fill with Dan Lilker having gone off to focus on grind superstars Brutal Truth. The former's flashier guitars are certainly felt through the album with the added licks and leads that burst out through pieces like "Another Violent End", while the latter just doesn't have those same, pulverizing rhythmic chops that his predecessor brought to the band. Neither is incompetent, but certainly their performance here contributes to the album's clear separation from their prior outings, and when they've only got such generally simplistic, chugging post S.O.D./M.O.D. riffs to work through, what could we really expect?

Reinvention I can handle, but not at the cost of that vital, youthful energy the band thrived upon through the 80s. Tunes like "Something Wicked", "Madness Descends" and "Chaos" are capable of getting the head banging for a few seconds, until one realized that nothing surprising or memorable is coming down the pipe. So many of the guitar progressions and lead sequences remind me of something Dave Mustaine would have written around this time that it's almost a distraction. They've also brought back a few of the useless ditties that plagued older albums, with the 9 second "Art" and a 40 second acoustic variation of "Another Violent End" called "The Other End". Only a few tunes like "Poetic Justice" (pre-profanity bridge) are ultimately able to conjure up that violent momentum of a Game Over or Survive, and while Connelly and Evans each deliver a decent performance, I found the album a sliver less impressive than Out of Order, which was already a letdown for many of the band's fans.