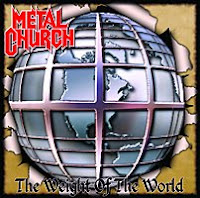 All components considered, The Weight of the World is actually no slouch of an album, with what might be the most professional production of any Metal Church recording to its day, and a far more enthusiastic roster of songs than were found on 1999's Masterpeace. The problem is that this just never sounded like a Metal Church record to me, but a band waving the flag of an established band moniker to keep forcing itself down a spiral into no man's land. Of the classic lineup, Kurdt Vanderhoof and drummer Kirk Arrington remained, but this came after the whole shitstorm of David Wayne once again exiting the band to start a solo project with former guitarist Craig Wells, and Vanderhoof's own pretty miserable side project which had a lot more commercial, wimpy hard rock sound to it. I had my reservations, so the fact that this didn't suck after the band's five year studio hiatus was a testament that there was some fire left burning in the veterans' hearts...well, the cover sucked, but this is no surprise, as the band seems to wish to set a record for 'lame' in this category.

However, it's almost like a new group entirely in tone. This had a far closer sound to traditional/power metal than any of the previous releases, and lacked those marginal thrash elements heard throughout the 80s. Ronny Munroe, who some might remember from the US hard rockers Lillian Axe (who flirted with some success in that decade), took the vocal reins, and like his predecessors, he's got an undeniable charm about him which seems to sparkle whether the band were writing compelling riffs to support him or not. Like Mike Howe, though, Munroe seems far superior when he's inducing some anger to his inflection like on the opener "Leave Them Behind" He's got this catchy, wavering texture to his voice when he sustains a note, and he's mixed phenomenally on the record, bold and clear without inhibiting the backing instruments. That said, there were a few moments on The Weight of the World in which he exchanged a bit of charisma to concentrate on smoother, deeper, generic emotional lines, and here I admit to losing some interest in the guy, since he could have just been anyone.

Another huge difference on the album is just how glorious and uplifting the riffs feel, far brighter than the hazy and menacing miasma that surrounded the older albums. That's not to say they don't get appreciably heavy in spots like the speed-tested "Hero's Soul" or Judas Priest/80s Sabbath worship of "Cradle to Grave" where Munroe has some great lines redolent of singers like Dickinson, but I always experienced a sunny sort of elation to the writing, which is mildly less appealing than something like The Dark. That said, a lot of the riffs and leads are well constructed, at least more so than the three previous records, and the other new members of the group (Malice guitarist Jay Reynolds, and bassist Steve Unger) fit in seamlessly into this style. They even squeeze in a hint of progressive rock influence in the middle of "Madman's Overture". I wouldn't dub a majority of the tracks 'memorable', yet there were moments in "Blood Money", "Leave Them Behind", "Hero's Soul" and even the playful "Bomb to Drop" which cast the impression that this lineup had been together forever, so well do they gel.

It's not a great album, perhaps, but easily a passable one. Not something that I'd recommend so much for Metal Church fans, believe it or not, but more towards those who have a love for the 80s records of bands like Fifth Angel, Riot, or the Dio solo works. Perhaps also Jorn Lande's so output or the heavier Saxon records of the late 90s, in terms of more recent comparisons. The Weight of the World isn't so distant from the old records that one can't draw some parallels, but it feels more epic than the Howe records like Hanging in the Balance and more happy than the old stuff, likely to leave a few of the bands hangers on feeling mildly alienated. That said, they were obviously happy with this outcome, because they'd continue to collaborate with Munroe for years to follow.