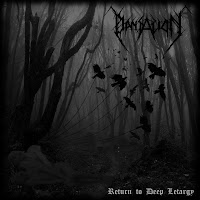 Return to Deep Lethargy is the fourth album of Spaniards Dantalion, and their first for Unexploded Records. If you've gotten the chance to hear their material in the past, you'll know that they perform a blend of traditional black metal with an overwhelming sense of melody and sadness that many would more often equate with the melodic doom of early to mid period Katatonia. It's perhaps important to note that band as an influence here, since they close out this disc with a cover of "Murder" from the 1996 album Brave Murder Day, but beyond that, the Swedes' inherent sense of layering melodic textures over driving rhythmic undercurrent permeates the majority of the six originals here, which creates a constant aesthetic of desperation and abandon that pairs well with the vocals.

Sanguinist's timbre is quite hoarse and tormented, almost as if he were gargling gravel until his throat began to bleed, and it actually adds a pretty effective contrast against the lockstep of the sorrowful guitar patterns. I will admit that a lot of the band's rhythm riffing seems nothing new if you've been partial to the Swedish hybrid of black and Gothic doom in the past, simplistic patterns of chords occasionally threaded with tremolo picking sequences, but once they get all their eggs in the same basket and have both the guitar progressions rattling off against the sobering pain in the vocal, they create a tangible level of suffering. The drums are quite reflexive and tight, with lots of dainty little fills to hold the attention, and solid foot work or blasting where the tracks begin to pick up pace, but I wouldn't say they erupt into a faster pace quite so much as they might have on their older records like When the Ravens Fly Over Me. Still, it's a great way of splitting up the more morose, slower terrain that so many of these riffs carve out.

There are definitely a handful of chord patterns here capable of hypnotizing the listener and providing for a deeper experience ("The Arrival of Silence" and "Onward to Darkness" in particular), but I still felt the niggling sensation that I'd been down this road before and that several of the band's somber forebears have written far catchier, gloomier songs in this niche. That said, Return to Deep Lethargy is an apt title for the record, and Dantalion have efficiently provided the soundtrack for an overcast afternoon of solitude and pessimistic self reflection which, more often than not, invests the listener in shared regret. I wouldn't go so far as to call this album 'depressive black metal', since the production of the guitars and drums seem too clean and professional for that sphere, the melodies too surfaced and accessible, but certainly the vocals have a coat of grime to them that wounds the soul. The "Murder" cover is decent, especially with Sanguinist's more tortured tone growling above the melody. All in all, a successful effort, if nothing unique or transitory.