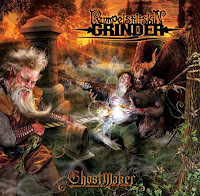 The ill-named Rumpelstiltskin Grinder doesn't likely require an introduction to a lot of folks following the more popular modern thrash currents of the 21st century. Their goofy nomenclature alone sticks to the brain like flies to scat, and collectively the members have a shit ton of experience from groups like Divine Rapture, XXX Maniak and others that you've also probably never heard of. That said, beyond just the 'novelty' and weak sense of humor that they cull from their lyrics and topics, they stand out from the legions of 80s wannabes through their incorporation of melodic death/black and grind elements into the primal Bay Area energy they evince from their guitars. Thrash is the mortar, surely, but the pestle is something more decidedly 'extreme'.

In the past, I haven't had much interest in their records; not just because I found them cheesy and unfunny, but because their tendency and technique of throwing a bunch of influence at the listener never configured itself into particularly memorable riffing or songwriting. Granted, Living for Death... was a firm step past the debut in quality, but let's just say Ghostmaker was not something I highly anticipated. As it turns out, though, this is a more cohesive and volatile product than tiehr of the preceding albums, a more muscular expression of the group's puerile purpose delivered across a dozen hymns of various fantasy contrivances like "Desert Goblins", "Nightworms" and so forth. The style is still propulsive thrash metal sped up with a variety of 90s influences, usually from Sweden, with the barked out snarling timbre made popular by groups like At the Gates (or Carcass, really). Sturdy rockers like "Nightworms" recall Witchery during their prime, with a fraction of added intensity, but these it turns out are only the tip of the beard.

Clearly, the Pennsylvanian band puts a lot of effort into scripting these tracks, because despite the fact that they ricochet all over the spectrum, they seem pretty well paced and balanced. I doubt anyone could accuse Ghostmaker of lacking variation, but sometimes, as in the bouncy grooves of "Iron Jaw" or the predictable breakdown grooves in "Dripping With Venom", this just doesn't payoff. They're far cooler when they are tearing out the more complex, busy death/thrash riffing reminiscent of fellow US groups like Soulless, Impaled or Ghoul, or their 'eerier' melodies like at the intro to "Cold Haunting Death". Thankfully, there are more than enough of these passages to declare Ghostmaker the best of the three albums I've heard so far. The production is good and even handed, impressive as they did it themselves; with a nice punch to the riffs; the one caveat is that the vocals are entirely too generic sounding and in dire need of some character. At any rate, fans of Witchery's Restless & Dead, Ghoul's Splatterthrash or Exhumed's Anatomy is Destiny might dig this.