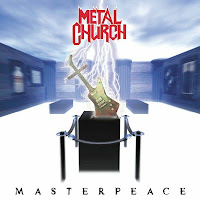 While I held out fairly high hopes for this inevitable Metal Church reunion record with singer David Wayne, it ultimately proved another of those myriad reformation disappointments, striving so hard to simply reconnect to the band's original level of inspiration that it fails to build upon their legacy in any meaningful way. Hell, before you've even gotten to the music, you feel underwhelmed by the terrible cover. The crucifix guitar returns, sure, but the bright white museum color scheme feels all too sterile a herald for the return of a bunch of hellions after a five year absence. Not that Metal Church has ever had luck packaging its albums, mind you, with the possible exception of The Dark or the cheesy but iconic debut photo, but this was not looking good...

Nor was it sounding good. Granted, it does not help at all that Masterpeace opens with one of the weaker songs, "Sleeps With Thunder", a steadfast but dreadfully average thrasher in which Wayne goes for a more eerie, nasal Ozzy Osbourne intonation/meter circa "Paranoid" or "Symptom of the Universe" and comes up pretty short, not to mention the distracting Alice in Chains-like wah or the annoying, useless micro leads shoved under the verse, or the underwhelming groove chorus. For one thing, I wasn't sure just how much the band was trying to 'ignore' the Mike Howe period of the band, or if that was even a motive. Certainly some of those same 70s proto-metal influences bleed through on this album, so it might be more or less a direct continuation with a slightly more metallic bite to it through the guitar tone, but either way, with the exception of the lead, the band's chance to blow you over was lost on this track.

In fairness, not all of the disc is a bust, and there are some brief moments of brilliance like the titular acoustic interlude with its ethereal, floating guitar melodies, or the simple yet catchy NWOBHM thunder in "Lb. of Cure" (great tune), but a lot of the more hard rocking cuts on the album seem to play it mildly safe, like "Into Dust", "Falldown" or the Aerosmith cover "Toys in the Attic". I don't know if age was wearing them down or not, but I wanted to hear David Wayne breathing clouds of noxious, incendiary gas over some balls to the wall, crushing metal hymns like "Ton of Bricks" that I can use to cast devil horns and middle fingers at their respective targets. Yeah, I wanted Reverend. I wanted The Dark. So sue me. This seems like an album more inspired by the groups' youths growing up in the 70s, and while it works in a few cases, I felt that strange sense of ennui creep in that I had for the oft praised 1993 record Hanging in the Balance.

The real tragedy, of course, is that this was the final official Metal Church record with Wayne on the mic. I would have hoped for a triumph. Sure, he would go on create a solo group with earlier guitarist Craig Wells and release the eponymous Metal Church (a little better than this one), much to the dismay of Vanderhoof, but in 2005 the world would lose this excellent singer, and I for one thing he had some fire left...somewhere. Alas, Masterpeace was just not as lethal or inspired as the band's first two records, where you could feel this clear momentum and have just about every 'banger for blocks around joining you for syncopated neck wrenching communion to "Start the Fire". This record was admittedly loyal enough to the band's catalog up to its release, but too often feels like it was meant more for putting one of the band members' kids through college than tolling the bell of its iron cathedral for miles, and summoning back all the lost lambs to the raging flock. Not their worst, but it was a letdown when I first got it to review for my old paper zine in the late 90s, and despite the repeated chances I've given it, remains so, with just the few exceptions.