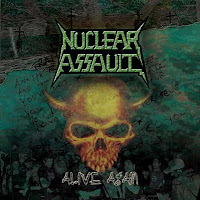 To this day, barring bootleg recordings which I might or might more not have any recollection for, Nuclear Assault have yet to produce a really great live record worth owning. The videos are alright, and certainly their gigs have been cool when I've attended them, but the sound they achieve on these discs sounds a little cluttered and lacks the ability to deliver some of the nuance they actually had in the studio. Not that this was ever a subtle band, mind you; more of a locomotive to the face, but I still like to hear all the instruments clearly. I had stated on the earlier live album review that they played a lot of reformation gigs here in New England, and this was partly due to the devotion of a local thrasher named Eric Paone (of veteran act CSDO) who loved the band so much he helped set them up some gigs and even filled in on bass for a few. I mention this only because Alive Again was recorded right here in Massachusetts, in spring of 2002, to a fairly enthusiastic crowd.

It doesn't sound a whole lot greater than Live at the Hammersmith Odeon, but that ruptured tone of the guitar seems a little smoother, and you can hear the bass vibrating off here like a radiation warning sounding off in some overheated nuclear facility. Connelly has a lot more piercing pitch here than I was used to, but this is likely due to the natural aging of his throat, so I've got no real problems with his performance. The drums are also on the level, but then they were not one of the issues I took with the last live. At any rate, I would say that Alive Again has a more 'dry' feel to it with the guitars better blended into a single bludgeon, less saturated and disheveled by the mix. Almost like the equipment used might have been more primitive, but the results balanced so that they don't annoy the ear; that said, this is hardly a gem in of itself, and I could rattle off 50 or 60 thrash/speed metal lives in short order that would be infinitely preferable.

When it comes to the set choices, though, this record blows away the Hammersmith. The only bullshit short comes at the end with "Hang the Pope", and the one actual song choice here I don't care for is "Butt Fuck", two words that might have once been shocking and rebellious in the 80s but are now just a few clicks away on anyone's weekday porn search. Every damn song, however, is taken from the first three albums, when the band actually really mattered, and you are at long last treated to great numbers like "Brainwashed", "F#" and "Radiation Sickness" which were suspiciously absent from the previous live album. "Trail of Tears", "New Song", "Critical Mass", all of those tunes you used to gnash your teeth and mash your head are present and unleashed with a fury, by the same lineup that fucking recorded them! How about that?

In the end, if you absolutely MUST purchase a Nuclear Assault gig in pure audio format, then you are not presented with the best of options. But Alive Again is the better of the two official ones. Personally I'd say to try and hunt down some of the videos like the European tour in '89, but those are probably even harder to track down than this. Not a standout thrash live, but far worthier of the brand than its predecessor.