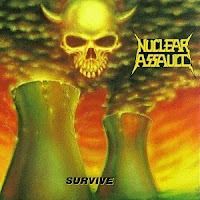 One minor detail that always struck me about the Nuclear Assault sophomore was the imperative tense of the title. This isn't 'survival', or 'surviving'. No, the band is telling YOU to survive, while a menacing Satanic skull leers at you from above a pair of toxic smokestacks. It all plays into how relevant the New Yorkers were to the 80s, that time of late Cold War paranoia, AIDS pandemic, waste dumping and ozone depletion circa 'glamor'. Like Jimmy and Billy Lee fist fighting through the fictional streets of Double Dragon, so too do the Nukes, ramping up the level of hostility showcased on their earlier EPs and issuing what might prove to be the very pinnacle of urban East Coast riot-thrash to its day, an excellent soundtrack for curb-stomping post-apocalyptic mutants or just flossing out the cerebral nodes of all the bullshit that surrounds you on a daily basis.

Tonally, Survive is not a massive evolutionary stride forward from the previous album. You're still getting those punk and hardcore motifs, they just seem to better bleed into the harder bite of the metallurgical ingredients they culled from their traditional/speed influences. The crisp springiness of the Game Over guitar tone has been supplanted by a more muscled aesthetic fit for abusing carcasses at a meat packing plant. I'd say that the production of this record was more 'professional', better balanced than the other area breakouts of this time without sacrificing any of its visceral potency. For example, State of Euphoria and Under the Influence had nothing on this in terms of sheer bludgeoning force quotient. That's not to say I preferred the sound here to the debut, but it certainly fits the bill for a band who were outwardly exploding into the market like this one. The vocals, bass and drums are all well managed in the mix, and there remains that substratum of urgency to Nuclear Assault's performance here which made you feel like the sky was dropping, that all hell had broken loose in the street outside your home, and that you'd break out that spiked bat or those brass knuckles and phase into survival mode.

The bass playing is quite good. Not only do the lines bustle along with a kinetic, workmanlike utility similar to fellow New Yorkers Anthrax, but Dan Lilker loads in the fills and sufficiently anchors what many people today would probably consider a relatively simplistic palette of axe rhythms. Evans is mildly more forceful than on the debut, with some of his own refined fills heightening the intensity, and the guitars implement a lot of atmosphere to round out the crude, belligerent rhythms (like the melodies in the bridge of "Brainwashed"), a component they drew forward from their moodier pieces like "Brain Dead" or "The Plague". Connelly seems more emotive in his singing, though that might just come from the better lyrical configurations. These guys truly know how to get the pits worked up and the dead proteins whipping in their audience, and a huge part of that is the message behind what they're singing. Survive encourages intelligence and individuality to a fault with tracks like "Brainwashed" and "F#". This isn't poetry, and the lyrics and concept might seem rather plebeian to a modern audience, but in 1988 we needed all the ammunition we could to battle the hordes of  Bon Jovi and Poison drones, and Nuclear Assault provided us with an entire silo of rockets and rounds.

Where the album really excels for me beyond its elder sibling is in the songwriting. There are still a few of those flighty, cheesy briefs like "PSA" and "Got Another Quarter" which speed past in such a blur that they hardly matter. The cover of Led Zeppelin's "Good Times, Bad Times" does nothing for me, not because I can't appreciate the band's love of classic rock or the contrast against the harder originals, but I feel like they might have made it far more incendiary and a better fit to the remainder. Survive is not an album I wanna turn to for hard rock grooves and firing up a bong. It's for flinging manhole covers at the passing vehicles of police and politicians, or subway rumbling with Ajax and Swan. So, while it's not at all a bad version of the 1969 classic, I've always felt like one of these things did not belong with the other. Otherwise, though, you're getting about 28 minutes of knuckle dusting, pavement scraping apocalyptic entertainment the likes of which you're just not going to hear outside of other classics, like the painfully underrated Act of God (ZnoWhite).

"Brainwashed" is the towering juggernaut here, a mid-paced anti-TV/radio brawler which earns points not only for its unforgettable, iconic chorus of 'why don't you think for yourself ' but also for the gleaming knife like leads, bridge atmosphere, and for including the phrase 'regurgitated pap' under its eaves. This also had quite a cool video with the guys moshing around their local turf, creating havoc, Connelly standing on stage for his close ups with an utter lack of pretension, just a baseball hat and ANGER. Again, as I mentioned on the previous review, there was no sense of separation between this band and their audience. These were the dudes standing next to you at the gig. They WERE you, only given a louder voice through vexed, precision thrashing. Easily one of my favorite headbanging tunes of 1988, which is saying a lot, since more than any other the year was over saturated with excellence (to the point that, as much as I enjoy Survive, it wouldn't even have made my year's end top 20). This brought the word 'conformist' to the forefront of my vocabulary to the point that I must have pissed off everyone I knew.

It's not alone, of course, and between the hammering momentum of "Rise from the Ashes", "F#" and "Equal Rights", the last being the most hardcore inflected on the record, there seems no end to the crushing unrest. Other mid-paced beasts like "Great Depression" and "Wired", with its great bass flow and echoed, arching screams might not prove so catchy as "Brainwashed", but they effectively exhibit the band's added level of compositional variation and depth.There's another pretty popular tune called "Fight to Be Free", the first single, which brings back the clean guitar and harmonies the band had used before, and even while it's not a particular favorite of mine, there's an airiness to it that seems to foreshadow the following record, Handle With Care; though the band does lurch into a straight up mosh sequence in the bridge with some countered, rhythmic barking and zippy leads.

Survive has itself survived the ensuing decades with nary a scratch to its surface, sounding just as volatile, energetic and rebellious as it did when I bought it. There were definitely other thrash albums around this period which I preferred, like the the staggering artistry and complexity European groups like Coroner and Deathrow had evolved towards, or the accelerated splatter of Razor's Violent Restitution and Tankard's Morning After, but this felt like East Coast. It felt like home, and like Game Over, Taking Over, Among the Living, Why Play Around? and other staples of the region, belongs in the paws of any discriminating cypher of the asphalt.