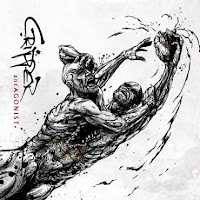 Cripper might not write the level of brass knuckle hooks and memory searing choruses that would earn them instant access to thrash royalty, but one thing I must say for the Germans is that they're incredibly consistent implementing their tool set; and Antagonist, while not exactly raising the bar set forth by Devil Reveals (2009) and Freak Inside (2007) before it, shows a slightly stronger sense for variation and nuance than I remember from either of those. It also benefits from a downright muscular production, and the brutal frontwoman Britta Görtz shoots for an even more over the top arsenal of grunts, growls and barks that glue together her local 80s influences and the more aggressive inflection one experienced in the 90s with bands like Pantera or Pissing Razors.

Musically, too, the band channels a lot of those tough thrash/groove forebears into a pummeling matrix redolent of fellow Germans like Destruction, Holy Moses and Tankard in their modern modes, so the album ends up somewhere between A Vulgar Display of Power and The Antichrist in execution. This is not achieved through any lax aping of riff patterns and song titles; it's merely the pretext to Cripper's ability to freshen the genre into a jerking, barbaric, street brawling sensibility which has just as much of a Bay Area spark to its conception. That said, there is something far more vital about this band's songwriting, than, say the latest Exodus and Onslaught records, two higher visibility groups that have tried to update themselves from the same post-80s sources and produced little more than unmemorable tedium. Tracks like the gut busting opener "New Shadow", rifling "General Routine" or the crawling and accelerating "Totmann" are loaded with some genuine mid to fast paced thrashing patterns and precision breakdowns that will loosen most any neck in its spinal socket, or fuel the primitive mosh dreams of a restless audience.

I most enjoy how they graft the meatier rhythmic riff circa The Haunted or Carnal Forge with the more clinical Teutonic thrash textures, like in the tune "Dogbite". These guitarists are always up to something, so whether or not the actual riffs stick, one need not wait long for infinite change ups to clobber you back into submission. There is a marginal level of experimentation, like the tremolo step that heralds "Another Lesson in Pain" (an Exodus reference?) or the baleful tones that cycle into the unique grooves of "God Spoken Prayer", and I haven't heard a lot of thrash records in recent months that are so well balanced in dynamic delivery. You may hate this band's music, or you may wallow in its punishment, but you will never be bored by it! Britta's vocals might seem overly blunt and forceful at times, rooted very much in death/thrash tropes with a bit of that Anselmo wildness, and it would seem restraint is not a word in her vocabulary. Yet she too reflects the kinetic, harried growth of the band's rhythm section...

Now, this isn't instantly infectious like a Zombie Attack or Sentence of Death or Persecution Mania, but it does have some legs to stand on, and I'd say it surpasses the prior efforts, which were both pretty good in of themselves. Other than the occasional gem from one of the German veteran bands, I can't say I've heard a lot of impressive bands coming out of that particular underground, so don't be surprised if Cripper rises to the fore. Tight, hostile, and not artistically bankrupt when it comes to their choice in titles and lyrics, they have all the weaponry to go further, and they very easily deserve the level of attention being foisted upon other modern thrash acts like Warbringer, Evile, etc.