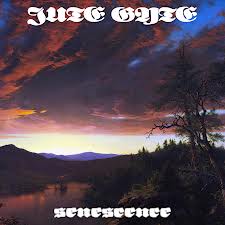 Though I found it the least engrossing of the six Jute Gyte albums I've yet covered here, it speaks volumes that Senescence maintains that sense of driving discomfort and experimentation that dominates Adam Kalmbach's project. In terms of artistry, this disc continues to carve out some of the more poignant and frightening terrain in all of USBM, a dissonant monolith of isolation unperturbed by trend or accessibility. But I found my disappointment stemmed largely from the first three tracks (representing about 30 minutes of material), which for some reason just weren't hooking me like these records usually do, and then there were a few dry spells later on the album that returned to the same, numbing sense that I'd been here before, and that this particular path of composition might be drawing to its natural conclusion.

There is some trace of redundancy with the earlier Jute Gyte black metal albums, but I would say that this is perhaps the most consistent in terms of its dry, heaving, scorched earth affectations. The lengthy tracks tend to hover around a 9-10 minute duration and mesh together a weave of faster paced, dissonant grime and breakouts of drudging, bombastic chords, which is not atypical for this project, and strangely mirrors a lot of the lower tier underground black metal which uses a good deal of repetition and padding along to the drum programming. That said, where Kalmbach's work has always differed is in his constructions of chords, which bring a fresh, yet still harrowing nuance to the predictability often associated with your usual tremolo patterns or Darkthrone/Hellhammer grooves. As such it has almost always felt like Jute Gyte was some parallel development of black metal which came out of some long lost continent, that had lost contact with the world since the first few releases from Burzum, Ildjarn, or other tortured souls responsible for bringing this primal and repulsive instinct to the niche. Senescence is no exception to this agenda, it simply loses of that element of surprise inherent to its predecessors.

I thought the most unique and fascinating piece here was tucked away at the end with "Griefdrone", a mortifying afterthought which almost feels like something off Filosofem if it had been infested with an almost sporadic improvisation of dungeon synth/B-grade horror score keys to create a convoluted canvas of slowly elevating filth. Once that imminent wall of distorted girth arrives deep into the track, it's like a crushing weight being applied to the listener's throat, and it's without a doubt the most memorable of these tunes. The titular "Senescence" is another of the Jute Gyte instrumentals, but this time quite different than "Isolation", which is hands down one of my favorite cuts in his whole catalog. Sad, stripped guitars ring off into a folksy ambiance with a 70s glaze of synthesis for support, and this is yet another of the album's standouts. As for the more purely black metal material, it's "The World Falls Apart Into Facts" which struck me hardest, a 10 minute behemoth of nihilistic blasting, atonal spikes of descending tremolo melody and some incredibly breakdowns into pummeling chords or spatial clean guitars and asylum screams in the substantial bridge.

Otherwise, I felt like a lot of the other material, especially on the first half of the disc, seemed to blend together, if only because the riff textures just didn't seem so distinct as others he's written. I do like the weird, swerving current of bass that rides the edge of perception alongside the thundering chord sequences, but there were only a few passages of guitars, generally during bridges, that came out of left field. The lyrics remain a highlight of this act, especially in "Striated Rubies" and  "The World Falls Apart Into Facts", evocative snips of poetry that eschew a lot of the faux-occult grandstanding popular with the genre in favor of some relevance to civilization, mortality and the individual's relationship to nature. The vocals have ever been the least novel aspect of Jute Gyte, but they still pursue that genuine suffering once manifest by the outsiders of the genre (Varg Vikernes the strongest comparison). Ultimately, Senescence is an hour of measured savagery with a few exhilarating twists, but it didn't rattle my perceptions quite so much as its slightly more eccentric predecessors like Impermanence or Old Ways.

Posted by autothrall at 5:38 AM