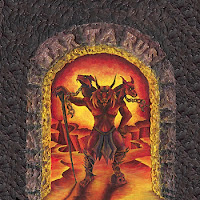 Just in time for Halloween, the devil coughed up two of his American pit fiends to reign fire upon humanity through his metal label of choice, Hells Headbangers. You won't find these bands at any Sunday Mass, unless they're in the basement planting explosives, but both are rather unsung heralds of underground US black and death metal who have actually been around since the later 80s. Sathanas is the more prolific of the pair, eight full-lengths under their bullet belts; The Spawn of Satan has only become really active as of the 21st century with a number of split appearances (like this one), and this was my first encounter with their music, but the members have all played in other notable bands like Nunslaughter, Crucified Mortals, etc.

Thus, the sound on their contribution "Ritual Murder" makes a whole lot of sense, an archaic hybrid of thrash and death metal which I wouldn't place far outside the Nunslaughter style. Crisp, driven rhythm guitars are driven over aggressive canter of drums, in the vein of Slayer or Possessed, and they break out an old school tremolo pattern for the bridge to up the level of morbidity. The vocals are harsh, unwashed, barks, quite angry and determined to defile and butcher Christians, and the lead is a brief splurge of molten seed wailing off into the hellscape. Sathanas, on the other hand, have a denser approach to blackened death metal with grim, splattering vocals and thick guitars moored in diabolic double bass and blasting. Definitely comes off like a hybrid of 90s Scandinavian extremity due to the atonal chord textures, and some ancient black/thrash pioneered by savage Germans like Kreator or Sodom thanks to the malice of the vocals and a handful of the riffing patterns. Not the best song I've heard from the Pennsylvanians, but competent enough.

Unfortunately, that's sort of my feeling based on the entire 7". I appreciate the style and sincerity which both of the bands implement in their songs, but they're just not particularly distinct or memorable due to the rather mundane selection of guitar progressions. Sathanas is the better produced of the bands, though I felt they complemented one another pretty well aesthetically in terms of lyrical themes and compositional skill. In the end, there's not a lot of material here with which to pass judgment. Just over 8 minutes, with one song apiece (I've been wondering lately why a lot of 7" splits like this can't pack in 2 songs per band). At any rate, it's a decent, fiery, and bloody collectable for those who adore the vinyl short form, and certainly the crowd of blasphemous heshers who worship hybridized black, thrash and death metal acts that have chased the heels of Venom, Bathory, Hellhammer, Sodom, Kreator, Mayhem, Slayer and Possessed...but nothing exemplary from bands with such a massive collective experience.