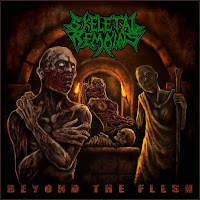 I should post up front that I've got an enormous bias for the brand of old school death metal Californians' Skeletal Remains pursue, with a large dusting of Floridian and Dutch influences that were important to me in my earliest teens when the genre had begun to branch away from thrash and become its own thing. Not only was the emergent genre so fresh, formidable and menacing at the time, but it was not shy on musicality, a plot point that is often lost upon the drudging derivatives rehashing all the old riffs with little ambition, or the endless pummeling present in the 'you mad bro?' niche of soulless brutality so prevalent over the course. So if that's your thing, and you're not so much into the older school sounds (at least of this variety), Beyond the Flesh might hold a more limited appeal, and I also won't be asking you to prom.

That said, if records like Consuming Impulse, Testimony of the Ancients, Cause of Death, Leprosy, Spiritual Healing, Considered Dead, Slumber of Sullen Eyes and The Ten Commandments are numbered among your personal favorites, then you'll instantly hook into what Skeletal Remains have successfully put together here. The vocals are straight up ghastly growls in a Martin Van Drunen style, with a bit of grisly excess redolent of John Tardy which renders them even more gruesome. The riffs are saturated with both steadier, morbid grooves and clinical death/thrash picking sequences which hearken back to the earlier Pestilence debut as well as Death's transition from 1987-89. Instead of just bland streams of muted notes, the progressions here actually feel dark and creepy ("Carrion Death"), reviving those reactions I once had to the band's influences. The production of the rhythm guitars to have a punchy but sodden aesthetic to it that reminded me of the Morrisound genre recordings of the earlier 90s, but this is counteracted by the well plotted lead work and melodies that constantly elevate the compositions above the level of just exhausted libations to death metal antiquity. Bass lines are copious, thickly embedded against the drums but often given a chance to wander away from the guitar passages and earn a paycheck unto themselves.

The drums are definitely simpler than what you'll hear in most modern tech/death, but he does a good job adding more fills to the efficient performance you'd have expected from Marco Foddis or Bill Andrews in 1988. Remember, this niche wasn't once all about double bass athletics or blasting away into boredom, but Beyond the Flesh is rhythmically overall a margin more contemporary than its forebears. Most importantly, this record delivers a great deal of variation from uptempo, swaggering force to more precision, surgical styled mute harmonies and other techniques that give the album an appropriately callous and inhuman feel to them. I won't promise that Skeletal Remains don't ride their influences a little too hard here, and they make no secret of what they're trying to achieve (their demo had a solid cover of "Chronic Infection" from Consuing Impulse, and this LP version of this debut delivers one for Gorguts "Disincarnated"). But by virtue of the fact that, to so many bands out there, a retrospective approach to death metal means 'Sweden 2.0' or a cavernous, reverb-soaked guttural colostomy, Beyond the Flesh feels somewhat like a fresh and practiced repurposing of a damn fine age to be into extreme metal.