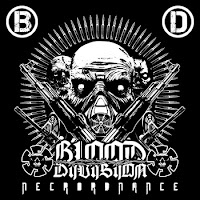 It's getting to the point now where I expect nothing less than my ears to be flossed with barbwire-strewn savagery when hearing Singaporean extreme metal, so I took the opportunity to don a helmet and flak jacket when approaching Blood Division's new digital/Bandcamp EP release Necrordnance. This thing looks, smells, and feels like a grimier, crusted riff on the 90s output of Finland's Impaled Nazarene, with the guitars scathing through incendiary punk/D-beat progressions and then ramping up for more extreme territory with black metal chord textures and blast beats aplomb. I also detected hints of old Sodom and Hellhammer, plus maybe a bit of Discharge or Disfear. In other words, it's vicious nuclear terrain which will flay the skin from your body if you're not careful enough to wrap it all down and brave its ripping, caustic, irradiated winds.

The whole thing's over and done in about 10 minutes flat, but the four tracks are all pretty varied in terms of individual length and substance. For example, "The Wait" is just a few seconds of distorted grunts and barks to set up "Hellhounds", a 4 minute thrasher which I would advise you not to listen to while driving, lest you hit the gas pedal without a second thought and ram yourself into a guardrail or pedestrian. The riffs aren't exactly complex in nature, but they sound so vivid and visceral as they wind through punk chords and thrashier palm mutes that you just can't suppress the belligerence it creates. The vocals here are a condensed, barbaric rasp which bears some similarity to Mika Luttinen at his basest, with a few nods to German beasts like Schmier, Angelripper and Mille, not to mention many in the black metal field they helped to inspire. The drums are as bright and bloody as the guitars, with loads of fills, blasts, double bass rolls to support the balance of guitar tempos, and the bass hops along dutifully through songs like "Morbid Requiem".

It's actually pretty well produced in terms of clarity, sharp enough to slice your brain up with a fat headache if you crank it too loud. Necrordnance is definitely not as primal or dingy sounding as the seminal works of many of its influences, and in fact I'd compare it more to an album like Sodom's punkier 90s records or the 21st century Impaled Nazarene releases in presentation. I didn't find the songs particularly spectacular in terms of memorable riff composition, and I'd like to hear more varied vocals in places, but on the whole I think this is pretty fun whether your poison is the currently popular blackened/speed/punk or other sickos on the Singaporean scene like Impiety or the grinders Wormrot. I'd prefer to hear the added variation and depth that would come with a full-length (again, this is really short), but it's not a bad little download if you love music that licks razor-blades and then drips the ensuing blood, spit and spite all over you.