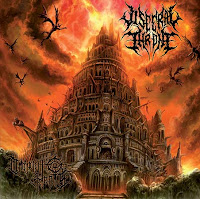 Though I've been a guitar player myself for over 25 years, I must admit that I find myself a little envious of all the sweeping, technical oriented brutal/tech death metal acts out there consisting of members younger than I. Not that this approach always results in memorable albums or strong songwriting, or would be the niche I would wish to participate in; but at the very least they create dextrous, surgical riffing sequences that are fun to follow. By all accounts, recent Brutal Bands acquisition, Indiana's Visceral Throne are another strong contender in this field, even if they offer little we haven't heard before. The performances are tight, the action intense, and you don't walk away from this without some feeling of having been punished, though results will vary for those not fond of the clinical efficiency and polished production usually associated with particular style.

There's not a lot of atmosphere or melody present on Ominpotent Asperity; it's more of a practice in pummeling and precision that swerves between simpler, chugging grooves and walls of nihilistic tremolo riffing. He'll occasionally fire off some striking, dissonant passage with simpler chords, but most often the guitarist keeps things kinetic and intricate, even when laying down a rhythm behind a frenetic lead sequence, and I definitely picked up a strong mid-to-late 90s Suffocation influence along with a lot of hints of Canadian brutality circa Cryptopsy and friends, only ramped up in speed to the appropriate levels you'd expect of West Coast frenzies like Decrepit Birth, etc. A few passages hinge on the slam side of the genre, with more minimal note progressions condensed into palm mutes, just often enough that it creates a nice contrast against the squeals, arpeggios and solos in which the listener can breathe. The drums are equally meticulous, with double bass rhythms clicking along so fast that they simply can't stop to make themselves more forceful, and a resonant, hollow feel to the snare hits which lends the blasting some gravity. The bass is fat and dense to counteract the more precise punctuality of the guitars, but it's not always as adventurous as what you might hear in other acts like Beyond Creation or Augury.

In terms of vocals, I didn't find the performance all that striking, but the deep, blunt amphibian growls are definitely streamlined to fit the highly percussive nature of the riffing patterns, and the guy's got a nice sustain to his gutturals when he barks out a phrase and lets the end syllable ride over a chord shift. The lyrics are neurotic, metaphysical explorations of mankind's failures, barbarity and the darker aims of religion (with a few biblical references), and even if this isn't the most unique subject matter some though obviously went into their composition. Blow for blow, Omniponent Asperity is not the most aggressive, frightening or proficient record of its sort, but there's no question that homework has been done and it deserves a passing grade in any classroom. As seamless and skilled as the performances are all around here, and as level and balanced the production, I did get the feeling that Visceral Throne's biggest hurdle is that they're not highly distinguishable from many others in the field. The riffs seem fluid and formidable when you're in the moment, but they don't often stick to you. But then, if you're a sucker for the rosters of labels like Sevared, Unique Leader, or Brutal Bands you've probably got schematic preconditions for what you're expecting, and Visceral Throne fit that mold just fine; and fans of Inherit Disease, Abnormality, Severed Saviour, Birth Through Gore, Spawn of Possession, Visceral Bleeding and other comparable acts should at least give this a go.