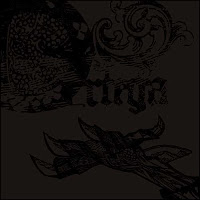 I'm not sure where my inherent aversion to a lot of sludge metal began, but down through the years I've been turned off by releases in that field far more often than not. There are, truthfully, a few dozen albums of the style that appeal to me, some greatly so, but on the other hand, a lot of the trawling Neurosis/Isis knockoffs and post-Sabbath/Buzzoven riff matrices that occupy both sides of this all too narrow spectrum feel so intrinsically bland to my ears that even with a blackened crust on top they simply lack the nuance and writing to stick with me. I say this because Ortega, a Dutch outfit seeing their 2010 debut reissued through Aesthetic Death this year, strikes such a rare balance between melody and potency that they took very little time in catching my attention and overcoming the mental hurdles I've faced in this category.

1634 is a maritime conceptual album, or as they dub themselves, 'ocean doom', and I feel that the musical content does a pretty job of living up to that handle. Passages of clean, ringing guitars are fused into a greater whole of drudging-doom riffs, but all are produced with a lot of weight and clarity. The rhythm guitar riffs are not necessarily innovative or nuanced, but the configurations of chords are strong enough that they keep the listener engaged through 6-7 minute track lengths. What really ties this all together, though, are the soaring and eloquent melodies that seem like slowed, subdued sea shanty paeans that are balanced expertly against the crash of the chords in the backdrop. You'll hear some of the better of these in pieces like "Shipwrecked" and "Octagon", but they are present throughout most of the disc, measuring off well against the subtler clean breaks and powering doom rhythms. As if they were some glorious tide enforcing the group's refusal to devolve into the ennui I often associate with the style and themes. The drums vary between the hard hitting grooves necessary for the sludge sequences and the slow, tribal climbs redolent of Neurosis (like the intro to "The Siren"), and the bass is thuggish and thumping enough to make its presence known here.

In addition, the band incorporate some beautiful, atmospheric relishes to the standard formula instruments, like a soft glaze of moody synthesizers or a guest violin player that really escalates the emotional narrative of "The Siren" and "Octagon". Vocals are a more rasped and tormented play on the traditional Neurosis bark, but there are also soothing, cleaner inflections to steer softer moments on the record. Altogether, the varied instruments and dynamics here succeed in as starved, semi-captivating journey across the waves. There were a few moments in which I didn't think the transitions worked, like the instrumental intro "Still" which could really just be any random bunch of dreamy stoner or indie-rockers leading up to the far more resonant "Into the Waves", but even to that piece you can develop a solid, internal vision of sitting by some ocean docks while the early boat traffic arrives and departs, a solitary gull wheeling off in the distance. Though the style of 1634 is not quite the same, I'd say the record has a load of crossover appeal for fans of maritime proponents like Germans Ahab or Mastodon's Leviathan, or a snug weekend affair with Coleridge's Rhyme of the Ancient Mariner, but without a doubt those that like airier doom with a lot of musicality, or progressive sludge pundits like Cult of Luna or Isis (Oceanic) will weigh this anchor and hoist its sails proudly.