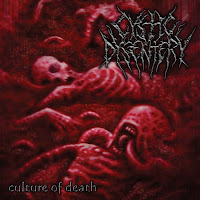 Imagine my surprise when the debut album by Cystic Dysentery called Culture of Death arrived in my digital promo inbox and turned out to be a heartfelt and introspective interpretation of Joan Baez classics. You've already guessed that I'm taking the piss with such a statement, but then that's really both the strength and weakness of this Floridian group's first foray into full-length extremity, coming a full decade after their inception: it sounds EXACTLY like it looks, and offers no more (and no less) of a pummeling than a thousand other similar acts have manifest through a good decade and a half since such muscular excess took hold of death metal and transformed it from its creepy, atmospheric roots to a space race of sorts, measured by how many limbs can be broken or strained in a short period of time. That's either a good or bad thing: if you're in the market for more of this approach to the genre, then Culture of Death won't let you down. If your tastes run more to nuance, novelty and even experimentation, or you're an old school diehard who finds very little to enjoy about death metal post-1991, then Cystic Dysentery has considerably less to offer you.

That's not to imply that this record is the most incredibly sterile, modernized,or unflinchingly technical wank fest out there. Far from it. The focus here is very heavily on the classic brutality of their influences, among which I'm hearing Suffocation, Cannibal Corpse, Pestilence, Sinister, Cryptopsy, and even Floridian forerunners like Malevolent Creation, Diabolic, Morbid Angel and primarily Deicide. There might be a lot more meticulous fits of tremolo picking and youthful intensity than you'd find on the Deicide s/t or Legion, perhaps, but that bulky, muscular frenetic style of chugging, and the often paired up guttural/snarl vocals brought me reeling back to those early 90s, only clad in a more consistent level of production and intense pacing. Some will undoubtedly find the drumming here a bit too clinical or polished, but the dude's a monster of blasts, fills and shovel loads of double-bass maneuvers that could instantly qualify him to perform with nearly anyone in the field. The bass is a little drowned out by the more processed and pugilistic timbre of the guitars, but it's plodding away with no hesitation to match them in speed and finesse. The guitars themselves are redolent of those writhing, sepulchral Morrisound tones of old, only a fraction brighter and perhaps not as thick or crushing as are necessary to really showcase the variety of riffs, which range from palm muted slug fests to explosive chord slides to spurts of surgical death/thrash derision circa early Pestilence.

Beyond my earlier Glen Benton comparison, the vocals do often take on a more gurgling guttural pallor which feels more typical of brutal tech/slam death today; and they also have periods where they are held out with more of a dour sustain. Like the instruments, they're perfectly suited to this style and sound exactly how you'd expect, but they don't ever offer up anything truly interesting or particularly gruesome. Unfortunately, that's sort of the impression I took away from Culture of Death as a whole. It's practiced, rhythmically rounded, percussive death metal which exhibits a bridge between the original extremists that transformed the style into what it's become today, and the many devotees that cling to their legacy. It's got a few glimpses of atmospheric in the zanier leads or riffs, and hits with enough force to derail a locomotive, but for the life of me I just could not distinguish any of the individual songs or components after about two hours straight of exposure. Cystic Dysentery honor their influences, and avoid several of the prevailing trends out there in recent years of extremity, and this is a decent debut for sure, but it just needs a little more excitement to the songwriting, evoked not through simply aggression but through stickier note progressions.