Opium Warlords - We Meditate Under the Pussy in the Sky (2012) 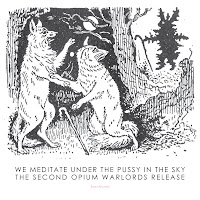 Though the album title and the band's name here are both fantastic, and the chosen artwork fascinating, it does feel for the first few minutes elusive as to what the Opium Warlords are bringing to the table for their sophomore, since the opening instrumental "Sxi-Meru" is not 100% representative of the contents of the record's remainder. What we've got here is a curious excursion into psychedelic drone/doom, interspersed with long passages of bleak, folksy acoustic guitars, contrasted by the irregular eruptions into distorted chords and tortured howls that are almost lost in places below the volume of the guitar. I was somewhat reminded of the US act Blood of the Black Owl, only We Meditate Under the Pussy in the Sky isn't nearly so grim or ritualistic, promoting more of a wasteful, morose, rustic scenario that breathes cold air into its spacious compositions.

There are only five tracks here, and no two are entirely the same in structure, with various instruments taking the 'lead' in various phrases. All are performed by a single musician, Sami Albert Hynninen, who has also played in Reverend Bizarre and Spiritus Mortis (among others), and you'll definitely hear a measure of correlation with the bleakness of the former, in just how dry and agonizing the simplicity of the guitars can be. Admittedly, though, in the case of this album, that is indeed their chosen function. This is not an intricate, complex or nuanced album by any means, but a sheer outcropping of emotion borne on very authentic, live sounding drums, and minimalistic progressions of notes. Walls of melodies are eschewed for a countryside coldness, and you can really envision yourself sitting by a decayed wall, abandoned farm equipment or a withered tree stump in an overgrown, kudzu-infested garden as you listen through. Apart from this banal, haunting, outdoorsy aesthetic, though, you can't always determine precisely what will happen next. For instance, "Sxi-Meru" is a noisy, guitar intro which morphs from calm atmosphere to spikes of dissonant, metallic noise, while closer "Satan Knew My Secret Heart" is all fuzzed up and uplifting...apart from the fact that both are very loosely, almost spontaneously composed, they've not got a ton in common.

I did feel the disc was more effective when Sami was laying on the 'doom' element full-bore, as in the dour bass ruptures of "This Wind is a Gift from a Distant Friend", or the wide open, 12 and a half minute center piece "Slippy" which gradually develops into these raw, raucous guitars and booming bass curves. I would have liked more vocals throughout; these seem more like a dusting tease than a prominent component of the songs. Also, at least for myself, I found that the music was all but useless when I wasn't mentally positioning myself in the proper shadow it casts, a slightly overcast panorama of rustic sadness, whether naturally or artificially induced through substances. Hynninen's vision is in no rush to get anywhere even though most of the tunes are reasonably brief), so if you're in a hurry or tense environment it's not going to function for you much at all. Won't say I loved this, but it's decent when one can really grasp its 'mood', and if you've an interest in the more ambient side of drone, doom or extreme metal like Khanate, Sunn O))), Fell Voices, or Blood of the Black Owl, with a mildly folkish discourse, give it a listen.