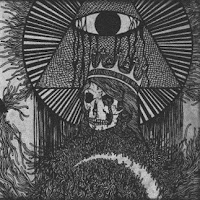 Regnum is a fairly longstanding cardholder in the German black metal underground, forming in the late 90s and producing a number of demos and splits in the new century which have led to a signing with Total Holocaust Records out of Sweden; a surprisingly good fit, since the grimmer aesthetics of both are so beautifully aligned. I was immediately struck by the excellent artwork of this CD, a crowned corpse almost drowned in a robe of squirming things, before a glaring, illuminati-like icon, and such a 'gray' perspective throughout that you'll certainly hear translated through the music itself. It was created by Tom Void of the Australian outfit Thrall, who actually have a comparable aesthetic in terms of their bleak, lifeless approach to no frills songwriting.

Dem Entwirklichten is primarily the product of a sole musician, Nachzehrer, who covers all instruments and vocals, and this married with the music's sense of isolation and emptiness will definitely draw some comparisons to the infamous Burzum, with an immediate appeal to followers of that depressive lineage. The pacing is generally slow, evoked in traditional and simplistic patterns of eerie, often dissonant picking against the steady skeleton of the drums, and Nachzehrer's caustic, grief-strewn rasps simmering in the atmosphere like a lone, demented vulture with its sights on prey. The chord progressions themselves are not themselves all that enthralling in terms of the note choices, but where Regnum stands out is in the choice to include these frightening, unexpected little surges of 'leads' or melodies (provided by Martin Lang of Todesstoß) that contrast messily and beautifully against the solemn, soul-sucking soundcapes of the backing guitars. There's always something uniquely alien and eerie about the effect of this technique, and the expansive structure of the songs (usually 6-9 minutes in length) create this feeling of being stuck in a desert at twilight, or in some black & white film.

I also loved the balance of guitars and bass, the former taking on an airier, sand-swept texture while the bass plugs along with a bit of swarthy, incandescent ritual grooves that occasionally reminded me of Virus or Voivod (especially in the depths of the track "Nachts Mit Der Totengestalt"). All of the instruments are mixed very well without seeming unduly processed or polished whatsoever, and as a result the album gets points for both celebrating its raw heritage and permitting the listener to fully gestate in is loneliness without straining to perceive any of its threads of misery. The lyrics/vocals are in the mother tongue of German, which I don't speak with any fluency, but I felt that the leeching sensation implicit in the songwriting holds up to most any translation. All told, while it's far from perfect, Dem Entwirklichten really understands the benefit of placing its audience into the same emotional void that inspired it, and thus it's a poignant, despairing experience well worth taking if you're fond of the suffering and solitude in black metal.