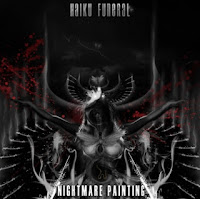 If you thought Haiku Funeral's name was curious, then wait until you hear the music these Frenchmen evoke from all manner of nightmares. A hybrid of Gothic, industrial and soundtrack elements pulled from a vast number of freakish sources, they create music that would be the perfect fit for some cult, B-movie classic of horror or cyberpunk, only with the caveat that there's an added sheen of complexity without the visual aids present. There's also a metal ingredient here, with the harsh and visceral vocals that often transform into asylum howls, but oftentimes the actual structure of the music is rooted in a progressive pop leaning that best suits its ability to disperse creepy curve balls in the listener's direction. In short, it's not easy to categorize: listen at your own risk, and without any preconceptions, and you might come away having a good, ghoulish time.

Tonally, the songs traverse quite a large spectrum of sounds even within the constraints of a 3-4 minute time frame. For instance, "Blacklight Amniotic Erotica" opens with thuggish, fat and I daresay 'funky' bass-lines over a distorted, driving mid-pace beat, while the vocals take on a brute, conversational quality, and then later it transforms into creeping ambiance and hideous rasping over ghostly, dissonant guitars. "Raining Nightbirds" is a surreal nightscape of electronic sounds that phase into and out of being like the backdrop of some eternally overcast cybernetic city, a distant beat substantiating its abstract momentum. "Your Heart a Black Tunnel" is like what you might expect if Abruptum was to remix a Massive Attack tune, and the vignette "Death Poem" is pretty much pure dark ambiance that wouldn't be out of place for Atrium Carceri. The connecting ligaments to all these pieces come through the vocal inflections which only range to about 3-4 styles maximum, and the associated darkness each of them shares. Some beats and synthesizers will often bear similarities with others, but there's really a plethora of subcultural electronic styles being flushed into this strangely cohesive, progressive matrix and capped with that darker hint of metallurgy.

One thing the album is not is grating, at all. You're not going to experience too many blinding floods of noise or angst. The compositions are fluid, and despite the eccentricity on parade, they're all pretty structured. I thought at times that the poetic, crank world view and atmosphere reminded me of the industrial legends Skinny Puppy, or the eclectic attitude reminiscent of fellow French act Pin-Up Went Down. Some of the swarthier, trip-hop-like passages reeked of Arcturus' The Sham Mirrors. But that's only the tip of the iceberg, and no such comparison can fully define Haiku Funeral's intentions. This record is really like a massive, electrode-tweaked finger painting by some child building its own reality from fragments of horror and outsider musical influence. I won't claim that all of the songs are catchy, or that the band doesn't have a distance to travel in perfecting this uncanny bastardization of forms, but I will state that there was rarely a minute among the 43 of Nightmare Painting that I wasn't, at the very least, interested (if not compelled).