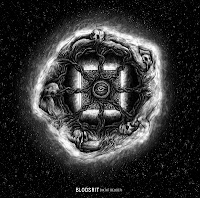 Blodsrit could hardly be considered the most prominent black metal act in their native Swedish scene, but 14 years and 6-full lengths ensure that they've been one of its most functional and consistent. I think part of their obscurity can be attributed to the fact that they've hardly broken the mold of the many and more celebrated Scandinavian peers. That said, with an arresting and duly competent expression of cold savagery like The Well of Light Has Finally Dried (2006) under your belt, you hardly require innovation to win an audience. Unfortunately, their 7th album (if we're counting the Supreme Misanthropy MMVIII remake of their 2001 debut) Diktat Deliberi just never seems to capitalize on the raw talents of its creators, and left me a little too dry despite the absence of measurable flaws.

In other words, the major drawback I had here was the dearth of distinguished songwriting, not for the lack or a sense of variation, but simply because so few of the riffs possess me for more than a brief time, and there just wasn't anything calling me back to the experience. In terms of potent, destructive, blazing and abyss born production values, Blodsrit can be counted among acts like Marduk, 1349, Dark Funeral, Setherial and so forth, because they get a nice, bold grime to the guitars that never dwarfs the listener's ability to hear each of the razing, roiling note progressions (though they create less of the mindless blast fest associated with those bands). The drums provide the essential, storming battery of muscular double bass driving and bursts of hellfire excess that defines this niche, which hit its summit in the mid-90s but still inspires a metric ton of later groups. They'll also layer in a subtle, non-exclusionary folk feel thanks to the sparse acoustic guitars (as you'll hear in songs like "Skapelseförfall"), and combined with the light use of synths this brings about an atmospheric nostalgia for Bathory's magnum opus Blood Fire Death. The vocals are evoked through full-bodied, ferocious black snarls, but again there's just nothing distinct about them.

So what we're left with is a pretty stock black metal record, from a band who seemed strongest during the middle of the previous decade with Helveteshymner or The Well of Light Has Finally Dried. In terms of aesthetics, this sounds a lot like it looks, but doesn't exactly deliver on the occult beckons of the cool cover icon. The thing that kills me about a disc like this is that, for all my indifferent reaction, there's really nothing all that wrong with, or inherently bad about the music. It has a voluminous, oppressive airiness about it when the Swedes are cruising along at mid-pace, and the riffs are usually different enough from one another that it doesn't succumb to the endless cycle of frustrating repetition. The instruments are all in place, and the vocals sufficiently unfriendly and misanthropic, but I just couldn't find the carrot on the stick here. Possibly worth checking out if you're into similar sounds from bands like Ragnarok, (90s) Emperor or Enthroned, or just want a straight-up, no frills onslaught of well produced black metal, but if you're approaching Blodsrit for the first time, you'll get better results by starting earlier in their career.