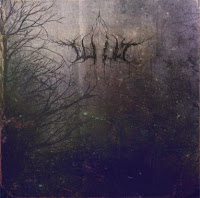 Winnipeg's Wilt present an entirely coherent union of visuals and sounds through their debut EP. What you're seeing on the cover of this thing is what you're getting within, a rush of desolate, textured black metal which seems far more aligned to the colder seasonal climes and pilgrimages unto a vast, empty wilderness than the urban/suburban envelope most listeners no doubt find themselves stuffed into for most of their waking hours. As such, I felt like the music here was presented well enough to grant that sense of distance, if not overwhelming in its choices of note progressions. While I was able to lose myself among its dreary boughs and limbs for the half-hour it asked of me, I can't say that there was much here which lingered long beyond the fact.

Wilt is far better suited to those who demand spacious, depressive black metal than the incendiary, blast fueled regime of more technically oriented aggression. Loads of double bass patterns are used as a bustling foundation for the simpler note patterns above, which provide a rather hopeful, repetitive meandering vision like following a bird of winter as it skates across the treetops. The low end of the music definitely gives the impression of the listener feeling 'rooted' to the ground and looking up at the grandiose heights surrounding him/her. Production is dense and fulfilling, as opposed raw and ripping with suicide-grime. Rather than the typical, rasp associated with the black metal spectrum, these vocals have a far broader, deeper timbre to them which works well as they echo out across the top of the instruments. But on the downside, while this is a rigid fit for the structure of the riffs, I felt like there was very little variety to the inflection, and some monotony did set in despite the fact the guy has some obvious pain tucked away. In general, the music here erred on the side of slow, dreamy caution, which also grew tedious in spots.

Don't get me wrong: Wilt will occasionally throw a spurious, measured blast in your direction (like the intro to the 11 minute "Empyrean"), but their writing is meant to move with the certainty of an ancient monolith through its wintry woodland environs. As if the oldest tree in the forest pulled up its roots and migrated to its afterlife, a ghostly procession of bark and withered leaves. Death and decay are legion, but there's a real sense of grace to the airy melodies they embed deep into the compositions, while never being as frivolous or cheap sounding as some of the tunes I've heard by Agalloch or Woods of Ypres (bands who possess a similar thematic approach to expression). If I've got one real issue with the music, it's that beyond these occasional exhibitions of lightness that divert the listener's attention, there's just nothing all that compelling or new happening, and it becomes burdened with its own sense of sorrowful certainty. The duo is competent enough at this style, and I found the EP a decent accompaniment for my morning rounds at the local park, but I'd like to hear them branch out a little further (no pun intended).