Manticore - Behold the Ascension of the Execrated (2012) 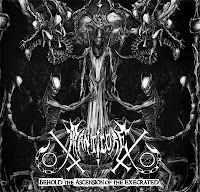 Ohio's Manticore is another of those primitive black metal acts which has subsisted deep in the US underground for some time now, with releases through a wealth of killer labels here like Hell's Headbanger, Nuclear War Now, Iron Bonehead, War Hammer and now through Georgia's Deathgasm. They've also borne somewhat of a death metal element thanks to the mixed use of atrocious rasping and guttural vocals, but musically I felt like they've focused more on the former half of the equation, with a roots black metal aesthetic reminiscent of oozing, bass heavy legends like Necromantia and Barathrum, and truly raw pundits of the profane like Beherit, Black Witchery, Blasphemy, Havohej, Profanatica and early Mayhem.

I admit I never really got into the older material I've heard from this band, and Behold the Ascension of the Execrated is unlikely to change my opinion much, and it's largely because the riff selection implemented by the band just doesn't stir me. On a fundamental level, I respect what the band's set out to accomplish here and they're certainly no worse off than a large number of these primal, despotic sounding acts whose modus operandi is sheer repulsion. Oozing, saturated bass distortion drives a lot of the compositions, while the guitar tone is likewise disgusting as it barks out drudging, death metal derived grooves or vitriolic faster paced riffs that feel like someone rubbed black/punk in some caustic slaw and then force fed the listener with it. Vocals are a no-holds barred amalgamation of throaty snarls and deeper growls, often sustained to a great dramatic effect or paired up in unholy union, but I often found that these, and the actual uncleanliness inherent in the production of the guitars was the album's most charming element. The drums are delivered with an incendiary succor to complete this ghastly experience, but they often seemed a bit weaker than that infernal sludge they were supporting...

Lyrically and thematically this is the blasphemous scripture one expects from such a hybrid of extremities, and songs like "Abhorrent Baptism in the Vestal Cavity" and "Abolished Holy Conceit" are unlikely to land Manticore in the good graces of the papacy; but, after all, this is a band named for a mythical abomination which delights in poisoning, paralyzing and devouring its prey. The Ohioans have no aversion to committing the ugliest and most minimal acts of barbarism possible, and such burdens as intricacy or technicality have no place whatsoever in their interests. On a purely aesthetic level, I dig what bands like this are about, but I still wish there was more levity and effort placed in the actual riff constructions, which are just not that interesting or evil sounding beyond just that horrific flow of visceral tone. If each song just had, say 1-2 compelling, bewitchingly atonal or eerie atmospheric guitar progressions to balance out the minimalism, there would be an instant, engrossing contrast to sink your mind into, but as it stands, this architecture of the music follows the law of averages with impunity. Not a bad meal for those on a diet of filth and damnation, but neither is it ultimately all that memorable.