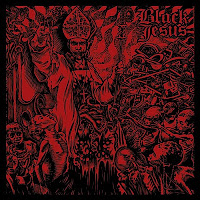 Originally released earlier this year through The Coffins Slave imprint out of their native Australia, Black Jesus's debut EP Black Jesus Saves is now getting a vinyl 12" edition through Hells Headbangers, and I doubt they could find a better harbor for their brand of walloping grime. Eight tracks of retro death metal with a mildly Swedish influence to the guitar tone, and likewise some uptempo D-beat driven momentum that helps carry the walls of fuzzy tremolo darkness that hearken me back to the years of records like Left Hand Path, Indecent & Obscure or late 80s Napalm Death; only the path Black Jesus takes to arrive at this sound is less atmospheric than the former and mildly less ballistic than the latter.

I was pretty impressed that, in just 19 minutes and 8 tracks, the Australians were able to broach such a dynamic range in the material, from burly and sludgy chord crashers like "River Bleeds Black" to the faster eruptions of death metal riffing. It's all very well paced out, and though the tremolo sequences do well to bind it all under one blasphemous flags, you can tell Black Jesus is not content to just constantly repeat itself. Granted, the brash bark of the vocal seems a margin dry and monotonous in the mix, something like an L-G Petrov if he were to spin a lot more of a rasp into his inflection, but it's nevertheless suitable for the lo fidelity of the production and contributes to the infernal/street authenticity of the writing. Drums have a very natural, slapping feel to them through both the D-beat rock rhythms and the volatile blasting, and the bass is fuzzed out and blends right into most of the rhythms, creating a brute, bulk consistency to the note progressions.

Of course, most of the tunes hover in around the 1-2 minute mark, and several leave something to be desired as the punkish punch out chords and death coil picking are fairly predictable, but then you hear a more substantial piece like "The Devouring" and its great setup to realize that this is a pretty capable band which constantly teeter on compelling. The wild, frothing leads are a nice touch for fans of d-beat or death & roll aesthetics, and the lyrics are pretty well written diatribes that debase herd mentality, violent foreign policy, religious hypocrisy and other sociopolitical issues which plague civilization to this day. From the band's name alone, I wasn't expecting something so serious and focused, but I am glad to have been proven wrong. Well worth a listen if you're into Entombed, Repulsion, Black Breath, Dismember, Tormented, Trap Them or other grime royalty, but don't expect anything novel or complicated.