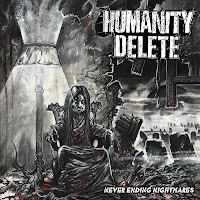 The major issue I face upon the advent of yet another of Roger 'Rogga' Johansson's latest projects is just how redundant it's going to seem with all the other pieces already in play. Surely, there are few human beings on this planet with as much of a commitment to the death metal genre as this man, and he's entertained me through dozens of records over the past decade. A lot of the groups he's involved with have minor aesthetic gradations in terms of their approach to the beleaguered field, but I do feel that, apart from the teamwork of their varied rosters, there are a few that could be wrapped under the same cloth. Ribspreader, Revolting and Paganizer certainly warrant some level of crossover in terms of their musical content, for instance...

And with Never Ending Nightmares, I feel this is once more the case, as the content could pretty much be interchanged with a number of his other bands, and it really doesn't distinguish itself outside of records like Carnage Junkies, Scandinavian Warmachine or Bolted to the Cross. There's a bit more of a grinding, punk edge to the music that's not uncommon among other Swedish death/d-beat hybrids, and I definitely encountered traces of Napalm Death and Bolt Thrower in both the bursts and grooved rhythms. I do like Rogga's idea of creating 'paranormal' themed grind rather than the usual, atmospheric death metal so often attributed to the theme, and the various samples and creepy bits he intersperses through the material help to give it a consistent, conceptual feeling, but when it comes to the straight burn of the guitar progressions, I do feel like so much of this I've encountered before. So, Humanity Deletes really all comes down to just how much more of this same, Swedish grinding style an audience is seeking to experience, rather than a novelty among Johansson's prolific body of axe-work.

Granted, this is a solo record and not so much a collaboration, so credit should be given to how well he handles each instrument. The guitars have that muddy, repulsive grinding flavor the Swedes have been using since the late 80s, and are usually configured into straight barrages of d-beat chords or uppity, thick tremolo sequences which sound like a blend of Dismember and Lock Up. The bass has a nice, coiled timbre but it is too often smothered by the sheer bulk of the guitars, while the drums are pretty fresh and fun even despite the blueprinted structure of their rhythms. I'd say the star of this show would be Rogga's vocals, which have a loud, pervasive inflection to them and plenty of body and echo carrying into the supernatural apocalypse implied through the horror lyrics. A few of the tunes, like "Retribution of the Polong" take on more of a death'n'roll persona with meaty, churning riffs redolent of Entombed circa the mid 90s.

The lyrics for this were written by Jill at Dead Beat Media, who has used her experience living in Malaysia to pursue Asian stories of the paranormal. In that way, this record definitely breaks some ground for Rogga. In fact, it's quite a contrast to have such corporeal music used to represent such 'incorporeal' haunts, but not an unwelcome one. Lasse from Hooded Menace chimes in on a few of the guitar leads, and they're seasoned, sporadic and unnerving enough to add another level, but ultimately I felt like a lot of the riffing patterns just felt too rehashed from scores of other records for me to truly sink my interest into. The production is great, and if you REALLY love a lot of this D-beat/Swedish/death  & grind revival, like Tormented, Mr. Death, Feral, Miasmal, Bloodbath, Paganizer, and so forth, then there's no reason you would not find Never Ending Nightmares a comfort. Yet, compared to the last two albums I've listened to from Johansson's impressive stable, Revolting's Hymns of Ghastly Horror or Putrevore's utterly crushing and superb sophomore Macabre Kingdom, I felt a little short-changed by this.