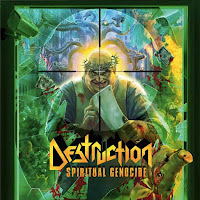 It's hard to believe that it's been over a decade since Destruction, a band I had no expectation of enjoying after the early 90s, completely totaled me with The Antichrist and renewed themselves as one of the premier forces in European thrash. Not only that, but that the band has been so productive ever since, with another five studio outings coming down the pipe, that this was no mere 'phase' serving as antidote to the constituents' midlife crises. The caveat is that the 2001 record (their second in the reunion) set the bar so damn high that all of its followers have proven too vertically challenged to reach it. Sure, they've all been moderately enjoyable, with little effort spared in terms of production, but the elephant in the room has yet to be shot for its ivory, and pretty much every release since (with the exception of Thrash Anthems) has felt like a regurgitation of The Antichrist with inferior songwriting: better than most of the retro thrash chaff, indeed, but hardly exemplary.

Enter Spiritual Genocide, and while I still can't shake 'that feeling' that we've been down this road before on one too many journeys, I feel that this record does a better job of reconnecting the listener to the intricate and unique riffing nuances that Schmier and Mike introduced us to in the 80s. There are complexities here, in particular through the bridge and lead sequences in a number of tracks, that feel as if an extra dimension of effort was placed into the composition. Also, many of the stock verse riffs here are pretty well executed, with the exception of a few shoddy breakdown style progressions ("Renegades") that might be forgiven due to the consistency of the remainder. Mike is wise to maintain some variation to his playing through the track list, so unlike a few of its 21st century predecessors there's less of a tendency for the material to 'run together'. You get the playful, clinical speed metal licking in "City of Doom" redolent of Megadeth at their prime, the meaty and oppressive "Riot Squad" where Mike is anchored by Vaaven's intense double bass barrage, the more accessible "Carnivore" which still succeeds in getting a number of surgical thrash riffs, or "To Dust You Will Decay" with its woozy, airier segues of chords. There's just a better sense of pacing throughout than there was on a few of the other recent records like Metal Discharge or Inventor of Evil.

Of course, it's still Destruction through and through, and you'll constantly have that uncanny impression that the band have muscularly redefined the framework and inspiration behind classics like "Mad Butcher" and "Curse the Gods" and given them a new paint job. Schmier's vocals are as squashed and salacious as ever, with a number of sustained sneers and growls to ween them in a contemporary context, loads of backing shouts that make you feel as if you were surrounded by bullet-belted berzerkers having a shoving match with your body. I didn't find a lot of the bass work to really stand out, but the tone is thick enough and Schmier's playing definitely aligns to the very percussive chassis of Mike's riffing. Vaaven is quite likely the hardest hitting drummer the band has had in its career, and Spiritual Genocide is no exception to his low end reign that is a perfect match for all those summer festivals and big tours the band is attached to. This is a dense, masterful modern Destruction mix which isn't a whole lot different than Day of Reckoning, not a problem here since it's not as if I'm expecting the buzzing mayhem of Sentence of Death 2.0.

I felt like the lyrics to "Legacy of the Past" were a bit cheesy, merely a batch of popular thrash/heavy album titles that the Germans 'approve' of mashed into verses, sort of like they did with the bridge of "Thrash 'Til Death" but taken to the extreme. A verbal crossword puzzle of metal masterworks. Otherwise it's a lot of pretty cool sociopolitical posturing which takes on government control, mass media corruption and other topics that hold true today. I found the intro piece "Exordium" relatively useless, an instrumental with some brighter, clean guitars and a drum cadence that doesn't set up "Cyanide" in any effective, meaningful way. On the other hand, the bonus tracks are pretty interesting. There's a second version of "Carnivore" with Tom Angelripper (Sodom) and Gerre (Tankard) guesting, more Teutonic royalty. But I must say that the inflections of the three vocals are so might flow together a fraction too well to really distinguish themselves, and sadly I preferred the version with just Schmier. On the other hand, the cover of Saxon's "Princess of the Night" is fuckin' spot on/ace, an angrier evolution made all the Germans' own through the musculature of the guitar and Schmier's viciousness. Ultimately, Spiritual Genocide is a pretty damn entertaining kick in the chin, superior to Day of Reckoning and any of the band's other full-lengths (of new material) since The Antichrist. Beyond a few niggling flaws, the trio joins countrymen Kreator, Holy Moses and Tankard in keeping things real for the Mayan Apocalypse.

Verdict: Win [8/10] (suffocate on your desire and disgust)