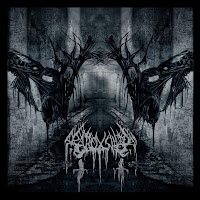 With bands like Mitochondrion and Antediluvian well under way, Canada has become a sort of Mecca for clamorous, repulsive, and enormously atmospheric death metal which thrives heavily upon its claustrophobic, cavernous nature more so than the intricacy of its inscription. Enter Paroxsihzem, another ugly and unbridled force of subterranean nature, and you've got a slightly more blackened spin on the style, thanks to the incorporation of airier tremolo textures applied to the morbid surge of death picking, and the prevalent blasted sequences here that give more of an impressive of the unbridled filth persistent in the Scandinavian tyrants of the earlier 90s.

Granted, death metal is still the dominant force, due to the enormous, resonant, stalactite-shaking guttural vocals, which take on a timbre not unlike Incantation during their Craig Pillard prime. In fact, these almost sound like an ominous earthquake shaking with protracted intonations while the guitars and drums keep far busier beneath. The guitars are extremely earthen, dense and layered to the point that careful observation is required to really pick out everything. Crushing chugs and grooves persist to split up the faster sequences, like the intro to "Deindividuation" which swaggers along with an almost overbearing doom/death force. The tremolo death metal sequences are more melodic than you might think, cycling in depressive but warmer patterns that attract the ear despite lacking much novelty in their structure or progressions. The album is so very adamantly deep and bass-heavy already that I often found it difficult to make out the lines of that instrument, but you hear it well enough like a floe of wet sediment against the chords.

Interestingly, the music is most chaotic from the 'bottom up', meaning the drums are constantly blasting and grinding are feel more deft and athletic than the guitars or vocals, a characteristic that is crucial to how cluttered, dissonant and confusing it all feels. In listening through Paroxsihzem, I felt I was a part of some psychological experiment being conducted in an obscure, underground bunker, testing the limits of sanity in tight spaces or under darkness while I was in a drugged stupor. An aural enema being observed and recorded by an emotionless team of experts trying to core out my humanity like it were an apple. The churning, voluminous aggression of the Canadians is overwhelming, morbid as fuck, and it never lets up, even when the band spits out some haunted sample over the tremulous furor. If I had one clear criticism, it's that like a lot of bands in this niche, the focus is more heavily on the atmosphere than the quality of individual note sequences, and thus this debut only feels effectively haunting due to its complete, crushing lack of light, rather than cleverly crafted riff progressions.

As this approach to atmospheric death becomes more widespread, the returns have seemingly begun to diminish, but that aside, Paroxsihzem is still a solid, shifting nightmare worth looking into if you're a fan of any of the bands I previously name dropped, or others like Portal, Molested, Funebrarum, Anhedonist, Muknal, etc.