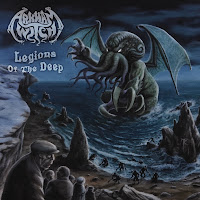 Heavy/doom metal and Lovecraft's Mythos are birds of a feather, as we've seen through the ages in bands like Manilla Road/Hellwell and many others, so England's Arkham Witch are already in good hands with this choice of theme, and judging by what I'm hearing on this second full-length, they do right by the niche, painting morbid tales of unearthly horror through take-charge, traditional NWOBHM styled construction steeped in a deeper sense of underworld aesthetics. I heard traces of Saxon, Witchfinder General, Pagan Altar, Diamond Head and Blitzkrieg amidst the more funereal, psychedelic overtures, and the commanding vocals are like a hybrid of Biff Byford and Mark Shelton without teetering so far into worship territory that they lack a sense of distinction unto themselves.

I vaguely remember the band's debut On Crom's Mountain through Barbarian Wrath (this time out they've joined the Metal on Metal family), which had more of a sword & sorcery aesthetic mixed with Lovecraft, sort of like The Gates of Slumber, Cirith Ungol or Doomsword, but it didn't leave me much of an impression despite my instant attraction to the Robert E. Howard subject matter. Legions of the Deep seems altogether better managed, more ambitious, and at the same time a fraction cleaner in terms of its production. The record runs the gamut from epic, march-like grandeur (opener "David Lund") to just feel good stoner-infused mid pace rockers infused with airy, understated melodies ("At the Mountains of Madness"), to angrier anthems that even exhibit a mildly doom/thrash territory ("Infernal Machine", "On a Horse Called Vengeance"). Arkham Witch is not going to win an award for having the most eerie, evil vibes to their songwriting, and they're far from the crushingest of British doom exports ala Electric Wizard and company, but then that's not really the point, since the style they've gone for is of a far more archaic nature with an early 80s vibe.

Of particular note here is Simon Iff's? vocal performance, which is stately and regal but fully capable of either slightly picking up its range or applying a bit of necessary gravel to the more peeved cuts throughout the nigh on 60 minutes of content. It immediately drew my imagination towards scenes of bold adventurers in 19th or early 20th century explorer's societies getting ready to tackle the supernatural or the unknown. There are occasionally passages where the vocals are used more to recite poetry or narrative, and this can come across more cheesy and playful than was probably intended, but not to the point that you'll lose sight of the murky, tentacled doom end awaiting you. In fact, the only part where I laughed out loud was the intro to their self-referential "We're from Keighley" where the singer pronounces to the audience 'Eat a bowl of fuck/I came here to parteeee' but after that the song does rock my nethers off. The guitars are well defined tonally without being overpolished: muted, harsher riffs have a good crunch, the flow of chords is swarthy, and the melodies possess a natural, sad lilt to them. The bass is grooving', but doesn't stick it's neck out that often, and the drums rock along at a simplistic clip which is representative of the band's NWOBHM influences more than a psychotic display of musculature.

Use of organs or other instruments is quite minimal, and to be truthful I wouldn't have minded more of such atmospheric embellishments alongside the more primitive of guitar progressions, but overall I found Legions of the Deep to be a classy, grand, old school metal outing with a lot of sweet leads and charms to it despite any derivation innate to the general riffing patterns you'll hear so often. It balances both the more biting doom aesthetics well with the lighter, flashier British metal feel I quite miss (until I dive into my old records and tapes), and really if you've a vested interested in most of the bands I listed in the first two 'graphs, you'll want to give it a whirl. It's not entirely memorable, and a case could be made that Lovecraft themes work better with more distinctly 'evil' riffing and disturbing atmosphere. But, hey, it takes all kinds, and if nothing else, Legions of the Deep rocks, and I'll not quite look at a dish of calamari the same again.