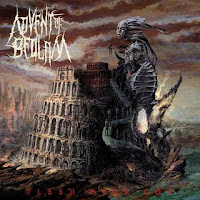 Flesh Over God is the sophomore of Costa Rica's Advent of Bedlam, who had impressed me a few short years ago with Behold the Chaos, a take no prisoners, aggressive approach to melodic death metal that brought variation and skill to an ailing sub-genre and helped prove that it still had some legs to it. Thus, I was pretty surprised to find that the group's core sound had mutated a bit with more semi-technical 90s death metal influences; but not at all disappointed, since Flesh Over God still exudes most of the same strong songwriting embellishments and musicianship of its predecessor. Most importantly, Advent of Bedlam just know how to write riffs that come across exciting and fresh (even when they're technically not), an ability that is more of a 'dying art' than you might think...

Right from the start, Flesh Over God evokes a more industrious and menacing side to the band's sound, complete with churning, palm mutes and full chords that erupt into an eerie tremolo riff over a blast. Loads of acrobatically chugging grooves are strewn about this landscape, with a lot of the brighter harmonies of their past eschewed in favor of creepier, darker note progressions. The guitar playing through the album often felt like a mixture of Pestilence's Testimony of the Ancients and New Yorkers' Immolation's later 90s work, swerving and swelling through periods of harsher dissonance and almost mechanical, unfeeling precision.They can build emotional, tonal melodies that have a post-hardcore influence with lots of glimmering octave chords ("Purification Through Pain"), but they also won't leave you hanging for long before they break back into some grueling, ominous old school death metal bridge that binds everything together. There is a drier edge to the guitar tone, and the drums are often a bit thin and tinny sounding, but overall I did feel like this helped lend the recording some clarity and credibility.

Vocally, they implement a conglomeration of blood curling rasps and harsher grunts, sort of a mix of Tomas Lindberg, Ross Dolan and David Vincent, sometimes splayed out individually in the verses, and while neither style might seem all that unique or standout on its own, they're both quite effective alongside the music, in particular where they bark out in grisly unison. The bass lines add a nice, deep, curving anchor for the guitar tone, and the drummer beats the living oblivion out of his kit, even if I wasn't blown over by their mix. I was happy to hear the familiar and excellent guest vocals of Tim Aymar (Pharaoh) in "Indoctrinate Wrath", which functioned so well in this harsher environment than his native band, that I wanted to hear more. The cover art to this thing is also pretty fucking crazy, with that surreal, insect-like avatar crushing feasting on its supplicants at a wasteland temple. The lyrics are not the most unique or poetic out there, but they're full of passion and anger that matches up well with the riffing hysterics.

I can't claim to have enjoyed Flesh Over God any more or less than the first album, but that's far from a bad thing. It's potent, it's different, and it shucks all the current trends of death metal without disengaging similar influences. Not a total facelift to their earlier sound, but a compelling, partial transformation. This band is once again worth paying attention to, and deserves a broader audience.