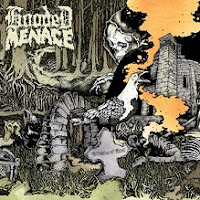 Don't be concerned that Effigies of Evil is Hooded Menace's third album for a third, different label, because this is surely more of a case of everyone wanting a bite rather than nobody wanting two. Some of the crushing novelty of this Finnish act might have worn off here, but once again we're faced with a band which takes its craft seriously, so much so that it writes better within this doom/death horror niche than just about any other active group I can think of. With the Relapse deal, they can likely reach an even broader base than before, and Effigies of Evil is perhaps their most accessible record yet, upping the variety of grooves, lurches and swaggers that characterize their approach to this beloved hybridization of extremes.

What has always struck me the most, and struck gold, about Lasse Pyykkö's dominant project, is the attention to detail through the riffing. Many death/doom acts are content to simply bludgeon along in the derivative configuration laid out by genre forefathers Paradise Lost, Asphyx and My Dying Bride, but Hooded Menace always has a lot of creativity and balance between the firmer mutes and grooves and the pronounced use of melodies and harmonies. There were rarely any snub-nosed, one dimensional moments marring their sophomore Never Cross the Dead, and the same must be said for its successor. Tinnier, clean guitars will be interspersed to break up harder metallic components, and even at the riffing's most basest impulse, the drawn out, almost funereal sounding slow sequences, they manage to break some fresh soil with haunting, memorable melodies. Even the 10+ minute opener "Vortex Macabre" eschews any hint of ennui when all its parts simply make a lot of sense together, and the presence of leads and myriad riff patterns ensures that you can forge through this piece repeatedly without succumbing to vapid exhaustion.

The vocals haven't changed much, they're still the same drawn out gutturals, but there's enough breath and sustain to the growls that they, too, elude the tedium I often associate with this style. They're admittedly not the most unique or compelling element to the music; that honor is bestowed upon the melodies, which achieve a great balance of Paradise Lost solemnity and the brazen harmony one might place in the mid 80s with bands like Metallica at their prime. Tracks like "Curses Scribed in Gore" or the ambient/sampled finale "Retribution in Eternity" even show a resplendent grasp of atonal majesty that hints at a deeper, more surreal level of atmosphere. The bass provides a solid pummeling, thick enough that it holds its own against the weight of the guitars, even if the lines aren't as well composed. Drums are polished, loud and perfectly fit to the slower, rock-borne Candlemass grooves that dominate much of the 50 minutes. If you've heard either of the prior full-lengths, then you know this is a band that doesn't exactly aim itself with the rawest trajectory: the tones are voluptuous and clear, but don't sacrifice heaviness in the process.

All told, this is nearly on par with the band's debut Fulfill the Curse, though I found myself drawn more to the songs on Never Cross the Dead. This time out the music just wasn't as creepy, despite the high level of compositional awareness. It's pretty consistent throughout, with no tracks really dominating others in quality, but all steady and varied enough to engage the listener. Samples are used sparingly, and there are at least a dozen or so highlight melodies dispersed through this that feel appropriately climactic and melancholic. Fans of Gothic/doom the likes of which are most common from Britain in the 90s, or the wave of Swedish bands like Isole who have picked up the torch, will have a blast with this and the earlier works, and those who enjoy well produced death metal with no shortage of melody and production will also dig it.