Splatterhouse - The House That Dead Built (2004) 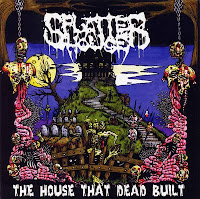 One of the stumbling blocks I always arrive at when revisiting the sole Splatterhouse full-length The House That Dead Built is just how close the Oregonians sound to their fellow West Coasters Ghoul. Both bands were involved with Razorback Records, and both put a similar fun spin on that old Carcass sound of the late 80s/early 90s, primarily in their choice of dual guttural and snarling vocal counterpoint which provides most of the charm and laughs. Hell, without liner notes in front of me, I'd just assume that the two bands consisted of the exact same lineup. For a long time, I probably believed this. Ghoul's first two (and best) records had come out before this one, and I liked their riffing progressions more, but this is still a tightly written and executed effort, and I suppose if I wanted to be technical, the slightly less silly Exhumed and Impaled beat both of these groups to the punch.

Right away, the production here is quite excellent, with a rich and pungent guitar tone that sounds like a chainsaw during faster tremolo sequences but also has a lot of meat to it when the band is just letting a chord ring out. The riffing patterns flurry between fits of Carcass-like death/grind and thrashing outbreaks, with a good variety encapsulated in the 34 minute run time. Slower progressions often remind me of Autopsy on their first few albums, or Symphonies of Sickness styled grooves, but the band favor a lot of brighter, sinister uptempo hybrid death/thrash licks that wouldn't have been out of place on Necroticism or even Heartwork at its most abrupt and pummeling. Plenty of blasting and great fills, though the drums can't really compete here with that dense crunch to the guitar tone. The bass is cozy and audible, but rarely distinguished as it clings to the guitar closely. Honestly, though, while there are a dozen or so money shot riffs on this thing, it's really the vocals that win me over, strictly due to their ghastly charisma; whether they're scripted in a call/response pattern or firing off simultaneously, they give you that impression of cannibalistic undead fighting over table scraps, and they even incorporate a deeper, disturbingly guttural timbre to play a sort of 'third character'.

As usual with these Razorback records releases, the horror sample bookends are legion, but Splatterhouse have fun with it, taking quotes from unexpected places like the Futurama cartoon. In fact, I couldn't identify most of them, so it's quite likely some were made up by the band itself; nonetheless they work very well here and create the appropriate, tongue in cheek atmosphere for the raucous tales of freaky parasitic infestations ("Night of the Creeps"), unlawful exhumations ("Confessions of a Grave Robber"), post apocalytpic warriors ("Mutilator"), and all manner of hilarity you might find in B-grade horror films from the 80s, or Troma films in particular. Add to this the band moniker taken from the cult 1988 video game classic (I used to own a copy for my TurboGrafx-16), the colorful cartoon artwork, and you've got what amounts to the quintessential sort of 'Razorback experience', never taking itself remotely seriously and bred simply as puerile entertainment for those with a carnal sense of humor and a love of camp horror/exploitation.

The cover of Canadian grinders Dahmer's "The Hillside Stranglers" is a fitting end to this; with the fattened, abusive guitars Splatterhouse really makes it their own; but The House That Dead Built is honestly quite consistent throughout the eight originals. Where it suffers the most is that the note choices and riff structures here are just not quite up to par with albums like Necroticism, Slaughtercult, Death After Life or We Came for the Dead!!!, and thus I always get the impression of a second stringer, an also-ran. That said, if you can't get enough of that sound, or if you just general love this label's aesthetics, there is no reason not to give it a listen. It's nothing amazing, and I don't feel the need to break it out very often, but it's tight, well recorded, and if you fantasize about having a night out on the town with your favorite machete...well...hack away?!